George Carlin, I miss him. He was clarity. 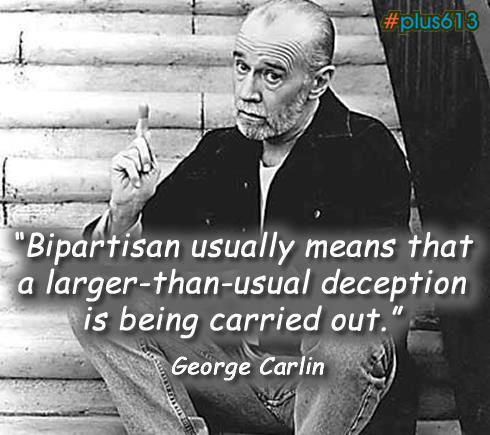 
Somehow it seemed as though the farm had grown richer without making the animals themselves any richer — except, of course, for the pigs and the dogs.
~ George Orwell, Animal Farm

The beginning of political wisdom is the realization that despite everything you've always been taught, the government is not really on your side; indeed, it is out to get you.

Sometimes government functionaries and their private-sector supporters want simply to bully you, to dictate what you must do and what you must not do, regardless of whether anybody benefits from your compliance with these senseless, malicious directives. The drug laws are the best current example, among many others, of the government as bully. Our rulers presently enforce a host of laws that combine the worst aspects of puritanical priggishness and the invasive, pseudo-scientific, therapeutic state. They tolerate our pursuit of happiness only so long as we pursue it exclusively in officially approved ways: gin, yes; weed, no.

Notwithstanding the great delight that our rulers take in tormenting us with their absurdly inconsistent nanny-state commands, they generally have bigger fish to fry. Above all, the government and its special-interest backers want to take our money. If these people ran a store, they might aptly call it Robberies R Us. Their credo is simple and brazen: "you have money, and we want it."

Unlike the sincere street criminal, however, the robber in official guise rarely puts his proposition to you in the blunt form of "your money or your life," however much he intends to relate to you on precisely such terms. (If you doubt my characterization of these intentions, test what happens if you steadfastly resist at every step as the brigands escalate their threats: first ordering you to pay, then billing you for unpaid balances plus penalties and interest, sending you a summons, and ultimately beating you into submission or killing you for resisting arrest. Your sustained, open resistance always ends in the state's use of violence against you, in either your forcible imprisonment or your removal from the land of the living, after which your memory will be defamed by your designation as a criminal — governments never settle for mere brutality, but always supplement it with unabashed presumptuousness.)

When I say "rarely," I do not mean that the authorities never carry out their plunder blatantly. Throughout the land, for example, criminal courts, acting as de facto muggers, strip people of great sums of money in the aggregate by fining them for conduct that ought never to have been criminalized in the first place — drug-law violations, prostitution, gambling, antitrust-law violations, traffic infractions, reporting violations, doing business without a license, and innumerable other victimless "crimes." The predatory judges and their police henchmen care no more about justice than I care to live on a diet of pig pancreas and boiled dandelions. They are simply taking people's money because it's there to be taken with minimal effort. In this manifestation, government amounts to a gigantic speed trap.

The more common way for government officials to rob you, however, involves their seizure of so-called taxes, which take countless forms, all of which are purported to be collected in order to finance — mirabile dictu — benefits for you. Such a deal! You'd have to be a real ingrate to complain about the government's snatching your money for the express purpose of making your world a better place.

Sometimes the "political exchange" into which you are hauled kicking and screaming rests on such a ludicrous foundation, however, that honesty compels us to classify it, too, as a mugging. I have in mind such compassionately conservative policies as stripping taxpayers of hundreds of billions of dollars and handing the money over, for the most part, to rich people engaged in large-scale agribusiness and, sometimes, to landowners who don't even bother to represent themselves as farmers. The apologies that the agribusiness whores in Congress make for this daylight robbery are so patently stupid and immoral that the whole shameless affair resembles nothing so much as the schoolyard bully's grabbing the little kids' lunch money and then taunting them aggressively, "If you don't like it, why don't you do something about it?" Every five years, when the farm-subsidy law expires and a new one is enacted, a few members of Congress pose as reformers of this piracy, but truly serious reforms never occur, and even the minor ones that come along from time to time prove unavailing, as the farm-booty interests invariably suck up "emergency relief" payments from the public treasury later on to make up for any shortfalls from the main subsidy programs.

Government sneak thieves, in contrast, fear that they may occupy more vulnerable positions than the agribusiness gang and similarly impudent special-interest groups cum legislators, so they dare not taunt the little kids so flagrantly. Instead, they specialize in legislative riders, budgetary add-ons and earmarks, logrolling, omnibus "Christmas tree" bills, and other gimmicks designed to conceal the size, the beneficiaries, and sometimes even the existence of their theft. At the end of the day, the taxpayers find there's nothing left in the till, but they have little or no idea where all of their money went. Finding out by reading an appropriations act is next to impossible, inasmuch as these statutes are almost incomprehensible to everyone but the legislative insiders and their staff members who devise them and write them down in a combination of Greek, Latin, and Sanskrit.

For example, for many years, a single congressman from northeastern Pennsylvania — first Dan Flood and then Joe McDade — substantially enriched the anthracite coal interests of that region by inserting a brief, one-paragraph limitation rider in the annual appropriations act for the Department of Defense. The upshot of this obscure provision was that Pennsylvania anthracite was transported to Germany to provide heating fuel for U.S. military bases that could have been heated more cheaply by using local resources. This coals-to-Newcastle shenanigan was a classic sneak-thief gambit, a thing of legislative beauty, but every year's budget contains thousands of schemes that operate with similar effect, if not in an equally audacious manner.

Unlike the government sneak thieves, the government con men openly advertise — indeed, expect to receive great credit for — certain uses of the taxpayers' money that are represented as bringing great benefits to the general public or a substantial segment of it. Surely the best example of the con man's art is so-called national defense, a bottomless pit into which the government now dumps, in various forms (many of them not officially classified as "defense"

, approximately a trillion dollars of the taxpayers' money each year. The government stoutly maintains, of course, that all ordinary Americans are constantly in grave danger of attack by foreigners — nowadays, by Islamic terrorists, in particular — and that these voracious wolves can be kept from the door only by the maintenance and active deployment of large armed forces equipped with ultra-sophisticated (and correspondingly expensive) equipment and stationed at bases in more than a hundred countries and on ships at sea around the globe.

Without dismissing the alleged dangers entirely, a sensible person quickly appreciates that the threat is slight — just do the math, using reasonable probability coefficients — whereas the cost of (purportedly) dealing with it is colossal. In short, as General Smedley Butler informed us more than seventy years ago, the modern military establishment, along with most of its blessed wars, is for the most part nothing but a racket. Worse, because of the way it engages and co-opts powerful elements of the private sector, it gives rise to a costly and dangerous form of military-economic fascism. Lately, the classic military-industrial-congressional complex has been supplemented by an even more menacing (to our liberties) security-industrial-congressional complex, whose aim is to enrich its participants by equipping the government for more effectively spying on us and invading our privacy in ways great and small.

Worst of all, despite everything that is claimed for the military's protective powers, its operation and deployment overseas leave us ordinary Americans facing greater, not lesser, risk than we would otherwise face, because of the many enemies it cultivates who would have left us alone, if the U.S. military had only left them alone. (Yes, Virginia, they are over here because we're over there.) The president routinely declares that the hugely increased expenditures and overseas deployments for military purposes since 2001 have reduced the threat of terrorism, but, in fact, terrorist incidents and deaths have increased, not decreased. Although privileged elements of the political class gain from militarism and neo-imperialist wars, the rest of us invariably lose economic well-being, real security, and all too often life itself. In 2004, people who said that security against terrorism was their top concern voted disproportionately, by an almost 7-to-1 margin, for George W. Bush. They had been conned.

Although the mugger, the sneak thief, and the con man are not the only types of government operatives, they make up a large proportion of the leading figures in government today. The lower ranks, especially in the various police agencies, have a disproportionate share of the bullies. No attempt to understand government can succeed without a clear understanding of these ideal types and each one's characteristic modus operandi. With this understanding firmly in mind, you will remain permanently immune to the infectious swindle, "I'm from the government, and I'm here to help." The truth, of course, is the exact opposite: I say again, the government — this vile assemblage of bullies, muggers, sneak thieves, and con men — is not really on your side; indeed, it is out to get you.