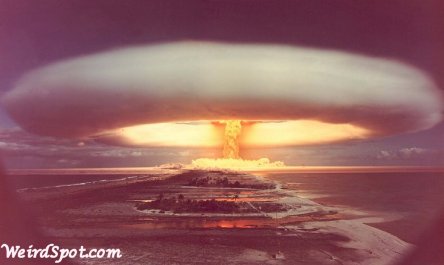 It looks like the french nucler tests at
bikini atoll in the south pacific that messed
up tons of turtles and other wildlife.

Read your history : Bikini is usa's nuclear H bomb ! French bomb was used under the ground...
Anonymous Report This Comment
Date: June 28, 2006 05:39AM

and people wonder why there was/is an ozone hole and fucked up weather... hmmm... could it be all the freaky weapons the USA keeps building? Has anyone read anything about H.A.A.R.P. in recent years?
Anonymous Report This Comment
Date: June 28, 2006 06:59AM

Yes that is my mistake.Bikini Atoll was trashed
by the Americans very severely.I had my islands
mixed up.The French destroyed Moruroa and Fangataufa
atolls in the south pacific.

haarp is a bad MF!

Try not to lose too much sleep over HAARP. Every summer, a couple dozen college kids go out there for a few weeks, and they listen to something, no one really knows what. They still don't know what the thing is capable of, because they haven't had any money to turn on the transmitter part. It takes something like 6-8 megawatts to do anything interesting. They have their own on-site generating plant, but they're too broke to start it up. For the other 49 weeks of the year, it's just handful of security guards way out in the middle of serious nowhere, with, I suspect, every cable channel on the planet.