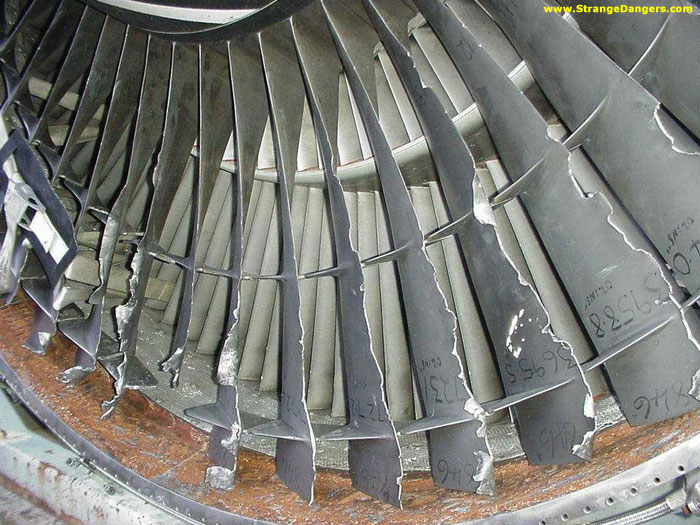 For anybody who is not familiar with a jet engine, a jet fan blade should be perfectly smooth. You might want to think twice the next time you fly on a Chinese Airline.
A pilot for a Chinese carrier requested permission and landed at FRA (Frankfurt, Germany) for an unscheduled refueling stop. The reason became soon apparent to the ground crew: The Number 3 engine had been shutdown previously because of excessive vibration, and because it didn't look too good. It had apparently been no problem for the tough guys back in China: as they took some sturdy straps and wrapped them around two of the fan blades and the structures behind, thus stopp ing any unwanted windmilling (engine spinning by itself due to airflow passing thru the blades during flight) and associated uncomfortable vibration caused by the suboptimal fan.
Note that the straps are seatbelts....how resourceful! After making the "repairs", off they went into the wild blue yonder with another revenue-making flight on only three engines! With the increased fuel consumption, they got a bit low on fuel, and just set it down at the closest airport (FRA) for a quick refill.
That's when the problems started:
The Germans, who are kind of picky about this stuff, inspected the malfunctioning engine and immediately grounded the aircraft. (Besides the seatbelts, notice the appalling condition of the fan blades.) The airline operator had to send a chunk of money to get the first engine replaced (took about 10 days).
The repair contractor decided to do some impromptu inspection work on the other engines, none of which looked all that great either.
The result: a total of 3 engines were eventually changed on this plane before it was permitted to fly again.
And soon they will export their cars to America, be sure to buy one of those quality machines so you can increase the trade deficit.

I have to call BS on this one. The author obviously is pro-American manufacturing and is just trying to use this to sway opinion.

A. Those aren't seat-belts, they are cargo straps. Those are like 10+ feet long... who has 10 foot white seat belts? And someone who can't spot cargo straps is going to explain what an turbo-jet fan blade is supposed to look like

The author goes on to use the airport code (FRA) to refer to an international airport. Seems like an attempt to make it sound more real. (known as useless details when detecting a fabrication)

A 4 engine airplane is not certified to take off with 3 engines while passengers are aboard. It is only certified to do so for "ferry flights". (aka taking the plane back for repair... empty) It takes a fair amount of extra skill to do and is usually handled by special pilots working for the manufacturer with the right training. Pilots have a really strong desire to live like the rest of us.

This is very likely a photo taken of an engine from an investigation of an airline accident after it ate crash debris in the final few rotations of it's life. That engine wouldn't have merely "vibrated"... it would have disintegrated had it been in use. Esp. with the split connector ring in the bottom center.

The last line is the sinker... shows the authors true intent. Even if it was true... what does a poorly maintained aircraft engine (probably built in Europe or the US) have to do with a car built in China?