A Pair of flip floppers.. 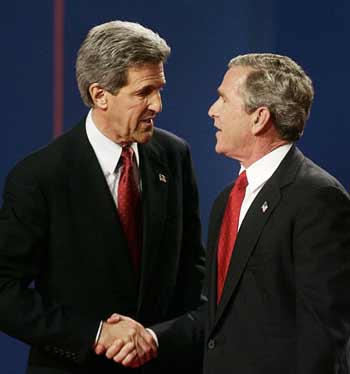 He was against it before he was for it.

For President Bush, last week's decision was the latest of several reversals on issues on which he once refused to budge. Since Democrats captured Congress, Bush has fired Defense Secretary Donald H. Rumsfeld, authorized direct talks with North Korea, sent more troops to Iraq, agreed to discuss the contours of a Palestinian state in Middle East peace negotiations, and even proposed a tax increase for millions of Americans -- all ideas he rejected earlier.

In Bush's case, he sometimes acknowledges a shift and attributes it to evolving conditions, such as his decision to increase the number of troops in Iraq after years of insisting he had sent enough to do the job. In other instances, though, the White House denies any change of position at all, offering nuanced arguments for why the latest move is consistent with past statements.

Bush's new health-care plan, for example, would raise taxes on 30 million Americans. The White House says this is not a real tax increase, because the proceeds would finance tax cuts for 100 million other Americans and the overall plan would be revenue-neutral.


Someone has a case of the Mondays.

If indeed this is true and we are talking to Iran and Syria then it could very well be the fault of people like you. If it looks as though military intervention is removed from the table because of shallow minded people in congress then the only alternative would be talks, even though talks are doomed to failure. I would see it as flip flopping but as attempting to do something even though our hands may be tied behind our backs. At least it would be something. You condemn him for thinking about invasion and now you condemn him for trying diplomacy. The man just has no chance in your eyes, he's damned if he does and damned if he doesn't.
Anonymous Report This Comment
Date: March 05, 2007 09:12PM

Bush didnt mind condeming people as un-american if they didnt supporty his policy. So cutting him no slack in my eyes is ok.Apparently Jgoins we had 8 yrs of republican leadership and all you have to show for it is,the most corrupt congress ever elected.How do you explain that. Suck it up and say" i did that". Meanwhile what did your Republicans actually acomplish.
You never except responsabilty for anything. We cant even get Iraq right.

Democrates are responsable to the fact we didn't stop the facist right wing sooner.

Every congress in history has been corrupt repubs and dems alike, so why should this be any different. In the 55 years of my existence the oil companies have always made out like bandits. Everything you are saying I have heard 10, 20 and 30 years ago about everything, politics and gas prices included. There is very little difference between now and the 70's where the rhetoric is concerned.