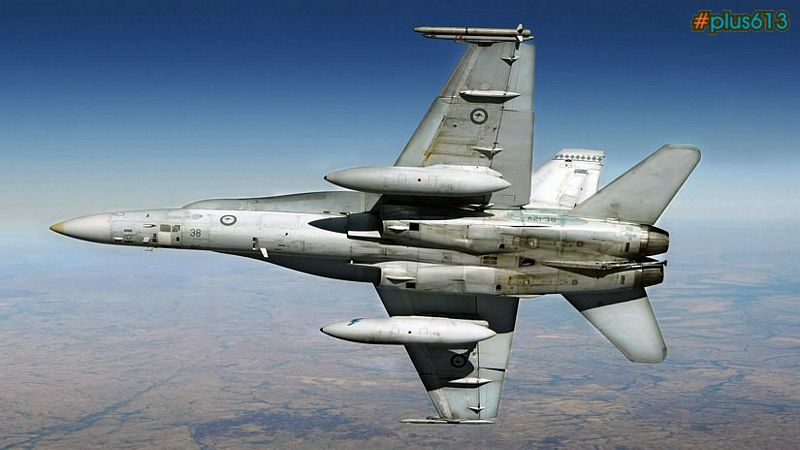 Yeah it looks like a Super Hornet, a super fucking dirty hornet.

It's missing two center-wing hardpoints too. Are all Kiwi war planes this dirty? Excuse me, those logos could be kanagroos I guess. Either way someone needs a bath.

You think our Air Force has something this sophisticated - that's hilarious. We used to have some Skyhawk's but they got so old that when we tried to get rid of them nobody wanted to buy them - and they were not replaced. Our Air Force consists of a couple of Hercules, an Orion, a Boeing 757 used to carry dignitaries and some Iroquois.

Just a few days ago one of our Navy boats that was carrying some VIP's back from what is basically NZ day (called Waitangi day) celebrations hit some rocks that are well charted. NZ is not known for it's military might.

Yeah, I looked that up too and was surprised. My mistake but funny. A4 Skyhawks are awesome little jets but yep they are obsolete. The Blue Angels used them for a while in the 70s.
GAK67 Report This Comment
Date: February 12, 2012 10:25PM

If you want to have a laugh at NZ military take at look at this: 100%

As an explanation, there is a TV show from Oz called The Gruen Transfer about the advertising industry and each week they get 2 different advertising agencies to come up with an ad for something made up. This particular week it was about invading NZ.

In our defence, while our Air Force is virtually 0%, we do have a small navy with defence capabilities and a reasonable army (for the size of our population) that is active and well trained.

I think the entire Australian and New Zealand air forces could fit on a single US aircraft carrier (minus the passenger jets).