Come jump with us 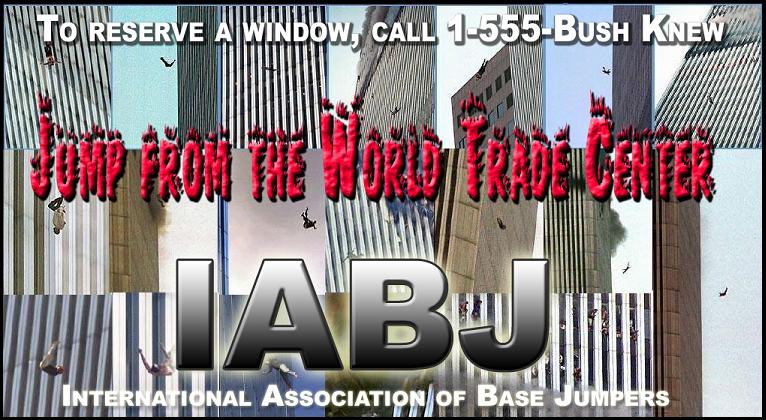 Sorry to tell you this, but Bush is far to ignorant to have known.
Anonymous Report This Comment
Date: March 04, 2005 07:29PM

I think Bush's ignorance is a really bid front he puts up... while we are inside laughing at the `show`, the real play is going on out in the parking lot...
Anonymous Report This Comment
Date: March 04, 2005 08:14PM

NOT EVEN FUNNY---Yes he Knew, but lets not expoit the tragedy of there lives ending this way. BUSH will get his in due time
jose Report This Comment
Date: March 04, 2005 09:33PM

Some people have very limited imaginations and therefore have a very hard time empathizing with other peoples' suffering. In order to comprehend the significance of this event, just concentrate and try to imagine that one of those people was you mother, father, brother or sister, or even a close friend.
rogue_1 Report This Comment
Date: March 04, 2005 11:01PM

...and to complete 8121's statement....the rest of the world doesnt feel the urge to ball up like some little bitch and cry in the floor every time they show the commercial of the hungry kids in small countries or the remains of a terror attacks like some of the bleeding heart republicans. Many of us could care less that it happened to New York....it would have meant as much to me if they hit Germany. Not everyone is a pussy like you 8121.
USA_SUcks Report This Comment
Date: March 06, 2005 06:45PM

ok - so an american dies and we're all supposed to be very respectful and solemn and, and if someone makes a joke out of it we become incandescent with outrage...

But Americans can make as many jokes as they like about the deaths of an italian special forces officer, an Iraqi civillian, or indeed anyone who looks vaugely brown and foreign - and it's a huge fucking joke.

Plug the hypocritical whining. Americans are just human beings who live in a diffrent place than other human beings - stop taking yourself so fucking seriously...

Dude. Bad taste. Even if Bush knew (uh... does he know anything?) still in bad taste.