NEW MAP OF THE MIDDLE EAST 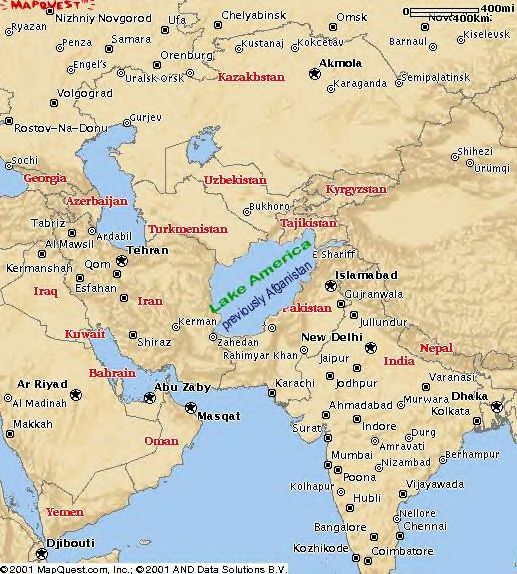 Never gonna happen. There'll always be collaborators willing to sell their asses to the u.s. so they can push their own people around, and if we didn't have them for friends, we wouldn't have anyone. It's getting hard for us to even buy friends in other countries, they're so sick of our foreign policy.
gruff Report This Comment
Date: March 28, 2005 05:43PM

I don't understand the point of the image. Is America supposed to have bombed Afghanistan into a lake? Why?
Anonymous Report This Comment
Date: March 28, 2005 06:29PM

for fun, and watersports. That is such a great idea, with a lake that size Afghanistan would be rich because of it's massive watersports industry. Plus it's mostly mountains so they can build hotels on top of them. This is American foreign policy actually making sense
Anonymous Report This Comment
Date: March 28, 2005 06:57PM

OH! Goody,Goody resorts,condos,ski-ing,bikini's,can't wait to see a muslim girl in a bikini with a covered head HA! HA! HA!,I'M hooking my ski boat up in a few minutes,does anyone have a road mad from the u.s to afghanistan? WoW! did you see that line at the recruiters office?
rogue_1 Report This Comment
Date: March 29, 2005 03:12AM