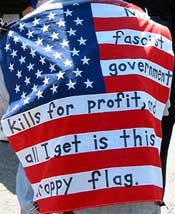 now duane, settle down and let the man speak his mind. We didn't bitch too much about you posting all of those tranny pics, so you can honor this man by letting him bitch about the person you voted for.
Anonymous Report This Comment
Date: April 18, 2005 02:09AM

Never under estimate the stupidity of the American left
duane Report This Comment
Date: April 18, 2005 09:16AM

Look I know you were upset when I broke it off but I swear I did not post those pictures of you(Laqueefa)25117.Im not upset because he is protesting Bush its the flag,no matter who is elected.I was still proud of the U.S.A when Clinton was in office,even though I did'nt like him.
anonymous Report This Comment
Date: April 18, 2005 09:24AM

An excellent point, 1485. All of the other issues like gay marraige, Terri Schiavo, violen t.v. shows are just filler to keep your eye off of the money. Middle class, working class and poor America is beeing fleeced daily. Prices go up way faster then wages, your right to due process (legal restitution, etc.)is continually whittled down. It goes on and on. Most of these decisions that hurt average citizens while greatly helpinglarge corporations and industries are being brought about by the very people they vted for. Bush, DeLay and Co. must laugh themselves to sleep every night at what saps their base has become.

Hey, how much did you pay for gas last night? The election is over America. Get ready to bend over and take it!

The Democrats have nothing to feel good about either.

Between the two of these parties over the past 25 years the U.S. is wildly in debt, massively losing out in the trade wars, losing (good) jobs and is despised in many parts of the world, distrusted (for good reason) in most corners of the world. And China and to a lesser extent India are poised to take our place as the world's #1 economy within the next generation (quite possibly much sooner). Other than that the Democrats and Republicans have done a swell job!

Keep up the good work!

[www.big-boys.com] the french sent troops to Iraq and heres there arival