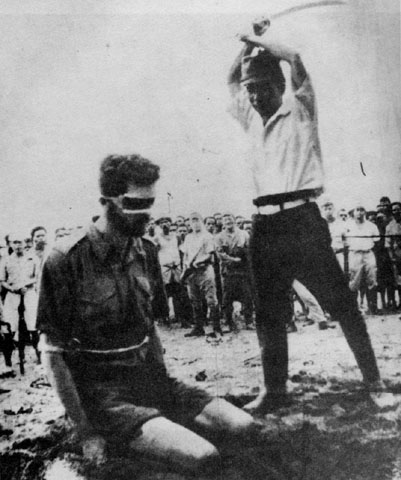 Actually retarded1 he's an australian pilot.i have this pic also in an old Best of LIFE book.Look at the fat nip with the giant shit eating grin.Allies made many copies of this shortly after to inspire them more to kill these sicko's
Anonymous Report This Comment
Date: May 17, 2005 03:04AM

Given the way this fellow is dressed would suggest that he's a British, or possibly Canadian serviceman. So much for American bashing...
Anonymous Report This Comment
Date: July 17, 2005 07:55PM

You idiots. This guy being executed is absolutely no different than the hundreds of Japanese soldiers we captured, tried and executedduring and post-WWII. It pays to know your history instead of merely making an emotional statement that means nothing. Bottom line--War is hell. I've been there, thus speak from experience.
Anonymous Report This Comment
Date: December 01, 2005 01:07AM

Thank-you 35231.The other kind of photos are out there.The "goodguys"are always on the attack even decades after war.What's there to hide?