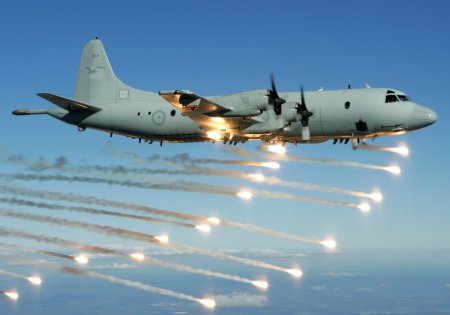 "It is likely that more Americans can name all the Girls of Abu Ghraib Gone Wild than the war's single posthumous Medal of Honor winner. For those who passively rely on the (mainstream media) to keep them informed, this would not be surprising.
Anonymous Report This Comment
Date: October 26, 2005 08:21PM

Guns are here to stay, till we blow up this big ass rock (earth) that we all live on. Considering that even 3rd world countries have AK47s, I'd rather not use sticks and rocks.
ToucanSam Report This Comment
Date: October 26, 2005 08:23PM

Looks like someone is on the defensive. Chaff Flares can only mean trouble.
Anonymous Report This Comment
Date: October 27, 2005 04:40AM

"Good people sleep peaceably in their beds at night only because rough men stand ready to do violence on their behalf."
John_Stone Report This Comment
Date: October 27, 2005 08:07AM

Exactly right! Why the "?" The world has and always will be ruled by the aggressive use of force. The countries with the most power and influence, over the world and their people, are always the ones with the most and biggest weapons. It's how they are used that makes the difference.
Anonymous Report This Comment
Date: October 27, 2005 03:03PM


Features: Originally designed as a land-based, long-range, anti-submarine warfare (ASW) patrol aircraft, the P-3C's mission has evolved in the late 1990s and early 21st century to include surveillance of the battlespace, either at sea or over land. Its long range and long loiter time have proved invaluable assets during Operation Iraqi Freedom as it can view the battlespace and instantaneously provide that information to ground troops, especially U.S. Marines.


The P-3C has advanced submarine detection sensors such as directional frequency and ranging (DIFAR) sonobuoys and magnetic anomaly detection (MAD) equipment. The avionics system is integrated by a general purpose digital computer that supports all of the tactical displays, monitors and automatically launches ordnance and provides flight information to the pilots. In addition, the system coordinates navigation information and accepts sensor data inputs for tactical display and storage. The P-3C can carry a mixed payload of weapons internally and on wing pylons.


Background: In February 1959, the Navy awarded Lockheed a contract to develop a replacement for the aging P2V Neptune. The P3V Orion, derived from Lockheed's successful L188 Electra airliner, entered the inventory in July 1962, and more than 30 years later it remains the Navy's sole land-based antisubmarine warfare aircraft. It has gone through one designation change (P3V to P-3) and three major models: P-3A, P-3B, and P-3C, the latter being the only one now in active service. The last Navy P-3 came off the production line at the Lockheed plant in April 1990.

This one is in RAAF livery. Prolly an AP-C3
for the tech heads
[www.tenix.com]

made perfect sense to me.and i'm a civilian.