my man fuckin' up! 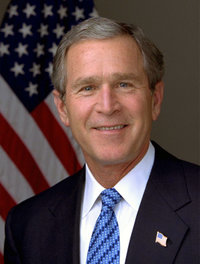 even though he's my man, he still says stupid shit evry once in a while. and when someone fucks up you just gotta laugh! here we go: "It's clearly a budget. It's got a lot of numbers in it."
-George W. Bush

"One of the great things about books is sometimes there are some fantastic pictures."
-George W. Bush

"It is clear our nation is reliant upon big foreign oil. More and more of our imports come from overseas."
-George W. Bush, Beaverton, Ore., Sep. 25, 2000

"I know the human being and fish can coexist peacefully."
-George W. Bush

"There's no such thing as legacies. At least, there is a legacy, but I'll never see it."
-George W. Bush, speaking to Catholic leaders at the White House, Jan. 31, 2001

"Natural gas is hemispheric. I like to call it hemispheric in nature because it is a product that we can find in our neighborhoods."
-George W. Bush, Dec. 20, 2000

"They want the federal government controlling Social Security like it's some kind of federal program."
-George W. Bush

"I think anybody who doesn't think I'm smart enough to handle the job is underestimating."
-George W. Bush

"Rarely is the questioned asked: Is our children learning?"
-George W. Bush

"If the terriers and bariffs are torn down, this economy will grow."
-George W. Bush, Jan. 2000

"I know how hard it is for you to put food on your family."
-George W. Bush

"When I was coming up, it was a dangerous world, and you knew exactly who they were. It was us versus them, and it was clear who them was. Today we are not so sure who the they are, but we know they're there."
-George W. Bush, Jan. 2000

"One of the common denominators I have found is that expectations rise above that which is expected."
-George W. Bush

"The great thing about America is everybody should vote."
-George W. Bush

"There's no question that the minute I got elected, the storm clouds on the horizon were getting nearly directly overhead."
-George W. Bush, May 11, 2001

"I am mindful of the difference between the executive branch and the legislative branch. I assured all four of these leaders that I know the difference, and that difference is they pass the laws and I execute them."
-George W. Bush, Dec. 20, 2000

"First, we would not accept a treaty that would not have been ratified, nor a treaty that I thought made sense for the country."
-George W. Bush, on the Kyoto accord, April 24, 2001

"I'm hopeful. I know there is a lot of ambition in Washington, obviously. But I hope the ambitious realize that they are more likely to succeed with success as opposed to failure."
-George W. Bush, Jan. 2001

"This administration is doing everything we can to end the stalemate in an efficient way. We're making the right decisions to bring the solution to an end."
-George W. Bush, April 10, 2001

"If a person doesn't have the capacity that we all want that person to have, I suspect hope is in the far distant future, if at all."
-George W. Bush, May 22, 2001

"Neither in French nor in English nor in Mexican."
-George W. Bush, declining to take reporters' questions during a photo op with Canadian Prime Minister Jean Chretien, April 21, 2001

"But I also made it clear to (Vladimir Putin) that it's important to think beyond the old days of when we had the concept that if we blew each other up, the world would be safe."
-George W. Bush, May 1, 2001

GW may not be the most articulate speaker, but he means what he says. Even when it doesn't make much sense!
aDCBeast Report This Comment
Date: November 19, 2005 08:34AM


We one man's trash is a stupid man's treasure.

LOL! Even Bush doesn't know what he means when he starts talking.

hey I've babbled before just like anyone else. mouth starts moving and brain shuts down in mid sentence. we're all human.
The_Doc Report This Comment
Date: November 19, 2005 04:25PM

Vladimir Putin, Dick Cheney, and George Bush. What does this amount to! Its simple...

if he could run again he would be elected again. why? because noone else has the balls to stand up and say,"fuck you if you don't like it! it's the right thing to do"
fossil_digger Report This Comment
Date: November 19, 2005 05:36PM

49. "We spent a lot of time talking about Africa, as we should. Africa is a nation that suffers from incredible disease." —Gothenburg, Sweden, June 14, 2001

47. "We both use Colgate toothpaste." —after a reporter asked what he had in common with British Prime Minister Tony Blair, Camp David, Md., Feb. 23, 2001

46. "Tribal sovereignty means that; it's sovereign. I mean, you're a — you've been given sovereignty, and you're viewed as a sovereign entity. And therefore the relationship between the federal government and tribes is one between sovereign entities." —Washington, D.C., Aug. 6, 2004 (Watch video)

45. "I glance at the headlines just to kind of get a flavor for what's moving. I rarely read the stories, and get briefed by people who are probably read the news themselves." —Washington, D.C., Sept. 21, 2003

44. "I'm the commander — see, I don't need to explain — I do not need to explain why I say things. That's the interesting thing about being president." —as quoted in Bob Woodward's Bush at War

43. "I am here to make an announcement that this Thursday, ticket counters and airplanes will fly out of Ronald Reagan Airport." —Washington, D.C., Oct. 3, 2001

40. "Oh, no, we're not going to have any casualties." —discussing the Iraq war with Christian Coalition founder Pat Robertson, as quoted by Robertson

38. "Haven't we already given money to rich people? Why are we going to do it again?" —to economic advisers discussing a second round of tax cuts, as quoted by former Treasury Secretary Paul O'Neil, Washington, D.C., Nov. 26, 2002

33. "I got to know Ken Lay when he was head of the — what they call the Governor's Business Council in Texas. He was a supporter of Ann Richards in my run in 1994. And she had named him the head of the Governor's Business Council. And I decided to leave him in place, just for the sake of continuity. And that's when I first got to know Ken and worked with Ken." —attempting to distance himself from his biggest political patron, Enron Chairman Ken Lay, whom he nicknamed "Kenny Boy," Washington, D.C., Jan. 10, 2002

31. "I couldn't imagine somebody like Osama bin Laden understanding the joy of Hanukkah." —at a White House menorah lighting ceremony, Washington, D.C., Dec. 10, 2001

30. "For every fatal shooting, there were roughly three non-fatal shootings. And, folks, this is unacceptable in America. It's just unacceptable. And we're going to do something about it." —Philadelphia, Penn., May 14, 2001

29. "I don't know why you're talking about Sweden. They're the neutral one. They don't have an army." —during a Dec. 2002 Oval Office meeting with Rep. Tom Lantos, as reported by the New York Times

24. "We need to counter the shockwave of the evildoer by having individual rate cuts accelerated and by thinking about tax rebates." —Washington, D.C. Oct. 4, 2001

22. "I wish you'd have given me this written question ahead of time so I could plan for it…I'm sure something will pop into my head here in the midst of this press conference, with all the pressure of trying to come up with answer, but it hadn't yet….I don't want to sound like I have made no mistakes. I'm confident I have. I just haven't — you just put me under the spot here, and maybe I'm not as quick on my feet as I should be in coming up with one." —President George W. Bush, after being asked to name the biggest mistake he had made, Washington, D.C., April 3, 2004

21. "The really rich people figure out how to dodge taxes anyway." —explaining why high taxes on the rich are a failed strategy, Annandale, Va., Aug. 9, 2004

19. "You know, when I was one time campaigning in Chicago, a reporter said, 'Would you ever have a deficit?' I said, 'I can't imagine it, but there would be one if we had a war, or a national emergency, or a recession.' Never did I dream we'd get the trifecta." —Houston, Texas, June 14, 2002 (There is no evidence Bush ever made any such statement, despite recounting the trifecta line repeatedly in 2002. A search by the Washington Post revealed that the three caveats were brought up before the 2000 campaign — by Al Gore.)

17. "The British government has learned that Saddam Hussein recently sought significant quantities of uranium from Africa." —State of the Union Address, Jan. 28, 2003, making a claim that administration officials knew at the time to be false

16. "In Iraq, no doubt about it, it's tough. It's hard work. It's incredibly hard." —repeating the phrases "hard work," "working hard," "hard choices," and other "hard"-based verbiage 22 times in his first debate with Sen. John Kerry

12. "I try to go for longer runs, but it's tough around here at the White House on the outdoor track. It's sad that I can't run longer. It's one of the saddest things about the presidency." —interview with "Runners World," Aug. 2002

8. "Major combat operations in Iraq have ended. In the battle of Iraq, the United States and our allies have prevailed." —speaking underneath a "Mission Accomplished" banner aboard the USS Abraham Lincoln, May 1, 2003

7. “We found the weapons of mass destruction. We found biological laboratories … And we'll find more weapons as time goes on. But for those who say we haven't found the banned manufacturing devices or banned weapons, they're wrong, we found them." —Washington, D.C., May 30, 2003

6. "Those weapons of mass destruction have got to be somewhere!" —President George W. Bush, joking about his administration's failure to find WMDs in Iraq as he narrated a comic slideshow during the Radio & TV Correspondents' Association dinner, Washington, D.C., March 24, 2004

3. "Too many good docs are getting out of the business. Too many OB-GYNs aren't able to practice their love with women all across this country." —Poplar Bluff, Mo., Sept. 6, 2004 (Watch video)

2. "Our enemies are innovative and resourceful, and so are we. They never stop thinking about new ways to harm our country and our people, and neither do we." —Washington, D.C., Aug. 5, 2004 (Watch video)

WHO IS THIS WANKER ANYWAY
Anonymous Report This Comment
Date: November 20, 2005 10:08AM

Just another idiot who over-estimates his own wit.
Anonymous Report This Comment
Date: November 20, 2005 10:10AM

...and that could apply to fossil_digger and George W.
fossil_digger Report This Comment
Date: November 20, 2005 03:24PM

thanks! proud to be mentioned in the same sentence as the greatest president in a long time! even if he forgets to turn brain on every once in a while. hell so do i. guess we are all human and not supemen. 65164, i think i'm gonna cry! like your opinion means shit to anyone, especially myself! hahahahahaha
fossil_digger Report This Comment
Date: December 09, 2005 07:01PM

don't foget to vote on the politics forum folks