More info on that Bear. 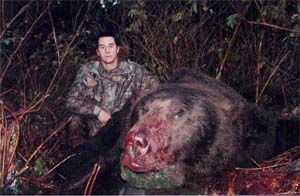 The following (first two) pictures are of a guy who works for the US Forest Service in Alaska and his trophy bear. He was out deer hunting last week when a large grizzly bear charged him from about 50 yards away. The guy unloaded his 7mm Mag Semi-automatic rifle into the bear and it dropped a few feet from him. The big bear was still alive so he reloaded and shot it several times in the head. The bear was just over one thousand six hundred pounds (1600#). It stood 12' 6" high at the shoulder, 14' to the top of his head. It's the largest grizzly bear ever recorded in the world.

Of course, the Alaska Fish and Wildlife Commission did not let him keep it as a trophy, but the bear will be stuffed and mounted, and placed on display at the Anchorage airport (to remind tourist's of the risks involved when in the wild). Based on the contents of the bears stomach, the Fish and Wildlife Commission established the bear had killed at least two humans in the past 72 hours. His last meal was the unlucky nature buff in the third picture below. The US Forest Service, backtracking from where the bear had originated, found the hiker's 38-caliber pistol emptied. Not far from the pistol was the remains of the hiker . The other body has not been found. Although the hiker fired six shots and managed to hit the grizzly with four shots (they ultimately found four 38 caliber slugs along with twelve 7mm slugs inside the bear's dead body) it only wounded the bear - and probably angered it. The bear killed the hiker an estimated two days prior to the bear's own death by the gun of the Forest Service worker.

Think about this - If you are an average size man; You would be level with the bear's belly button when he stood upright, the bear would look you in the eye when it walked on all fours! To give additional perspective, consider that this particular bear, standing on its hind legs, could walk up to an average single story house and look over the roof, or walk up to a two story house and look in the bedroom windows

A lot of pop ups on that site. There is more then one story on this bear hmmm.
brokntoad Report This Comment
Date: April 03, 2006 02:39AM

Dam I thought this was a true story.