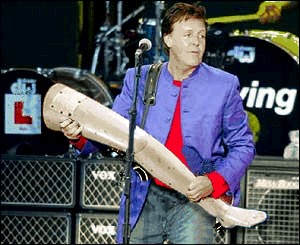 I bet if he tried real hard he could probably fuck that leg.
Anonymous Report This Comment
Date: June 28, 2006 05:34AM

It's a very sad world we live in when Sir Paul McCartney and his wife are facing divorce and all anyone seems to want to do is make jokes about her false leg.

Personally, I think it's prosthetic.

News reports have confirmed that Paul McCartney has separated from his wife Heather Mills-McCartney.

Mrs Mills-McCartney is said to be distraught over the split. "He has been “my crutch for so long"! She said in an earlier briefing, "I have no idea why this has happened, I'm stumped"

"She's running around in circles", according to a close friend, "She will need all the support she can get. It's not like it’s easy to walk out on a relationship like this."

It is not known whether a pre-nuptial agreement was signed prior to the marriage. Paul McCartney is one of the richest men in the world amassing a colossal wealth due to his participation with The Beatles and subsequent musical collaborations, if an agreement hasn't been signed, it is believed that she won't have a leg to stand on.

Rumours abound over the split which have suggested that infidelity may have been the cause. "She's terrible" a source stated, "Always trying to get her leg over".

Another source has suggested that her battle with alcoholism was the cause. "Macca couldn't handle it anymore" a friend said, "He would get home at night and find her legless."

Many have attributed this to a problem which started with the present that Paul bought her prior to the wedding. He gave her a new Prosthetic leg for Christmas but that was just a stocking-filler. The main gift was a wood-plane, but he gave her a Lady Shave for the other leg. Apparently she wants to keep the plane, but she says she'll buy her own Immac for the other leg.


A poem by Sir Paul McCartney: I lay upon a grassy bank My hands were all a quiver I slowly removed her suspender belt and her leg fell in the river


These jokes are funny but let’s spare a thought for Paul please. Now she has left him, he's going to struggle to find another lady that can fill her shoe.