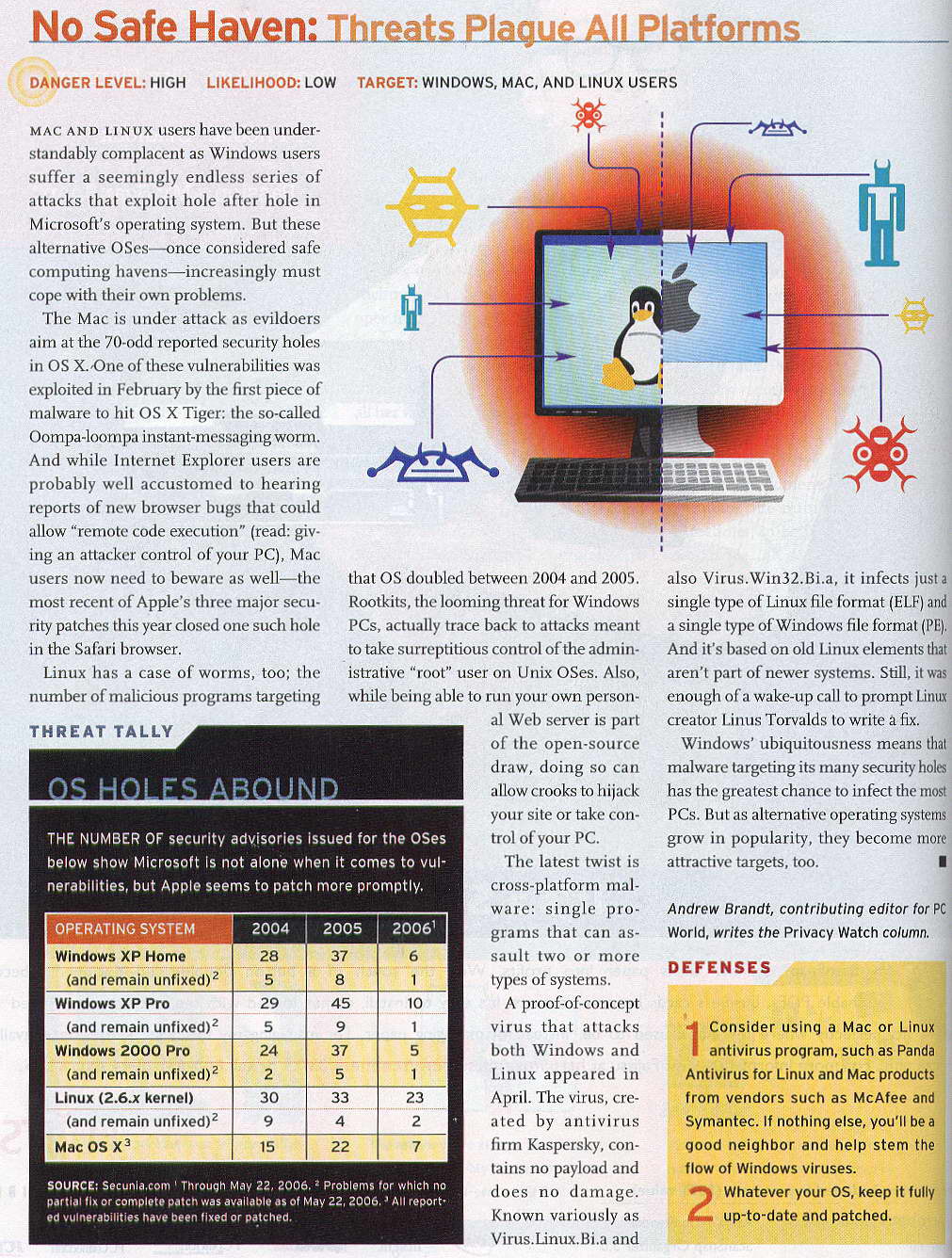 Read it all before. One of the beauties of Linuxs new Ubuntu 6.06 OS is it no longer allows a user to run as "root" while allowing intermittent use of the "root" function for software upgrades etc. as necessary, then kicks you back to your user as soon as the operation is finished with the need for the "root" function.

The open source software nature of Linux is one of the best things goin fot it. Hard to hide anything when the code is open for anyones scrutiny, unlike with MS or Macs OSes.

BTW, with Ubuntu, software upgrades are as easy to keep up with as with XP. Get an icon on the task bar tellin ya there are updates to take and click on it, piece of cake !

I'm a non geek and if I can play in Linux, so can anyone using a MS or Mac OS.

Linux is gaining on Windoze with leaps and bounds, fueled in no small part by govts demanding open source software as opposed to proprietary softwares for their agencies.

As all giants do, MS will end its reign/stranglehold on the industry.

Now then, who's gonna ever replace the damned Wal Marts ? :>

i'm usin' fc myself it doesn't have that nice feature with the root though what i do is just use my regular user and when i needa do some admin shit i switch over in the terminal then switch back right when i'm thru...
so how is ubuntu get along with hexp? cus i'm havin' a bitch of a time getting fc5 to dual boot with it on my new comp... have to use hexp cus my pops needs it for certain function with his job, but is begging me to make it dual boot with a linux os and eryone hates my older machine lmao it still gotta friggin' pentium 2 on it
mrkim Report This Comment
Date: July 10, 2006 11:55AM

Sorry I can't truly speak from experience on the dual boot deal shaDEz, but you're supposed to be able to partition off the drive and run it as a dual boot. Myself, I just run Ubuntu straight up, so ...:>

Installation is a breeze too man. On my machine (1gig Thunderbird processor w/1gig DDR) it only took about 30 minutes to set up.

I also loaded it onto a really old 450mhz Pentium II machine with a blistering 64megs for my daughter and the speed it operates at compared to the 98 that was on it is truly impressive, though I did drop in another 256megs of memory.

If ya wanna play around with it and have the HD space to make some room for it, I highly recommend it buddy !

aight thanx! i'll go ahead with the images for it lol i got like three linux os's to fuck with now
Anonymous Report This Comment
Date: July 10, 2006 08:04PM

BTW, shaDEz or anyone else who wants some info on Ubuntu here's a link that'll answer most anything you mightb wanna know about it : [ubuntuguide.org]
shaDEz Report This Comment
Date: July 11, 2006 02:41PM