mar coming in for a closer look 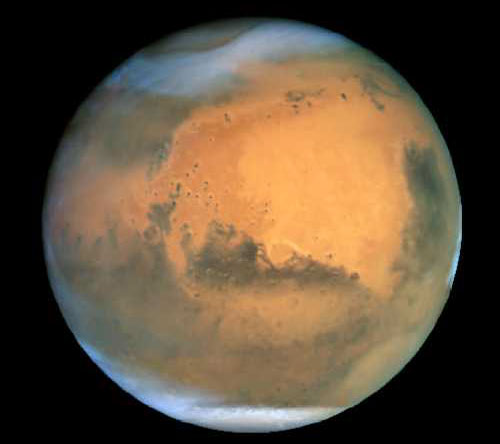 Comments for: mar coming in for a closer look
fossil_digger Report This Comment
Date: July 11, 2006 02:32PM

The Red Planet is about to be spectacular!

This month and next, Earth is catching up with Mars in an encounter that
will culminate in the closest approach between the two planets in
recorded history. The next time Mars may come this close is
in 2287. Due to the way Jupiter's gravity tugs on
Mars and perturbs its orbit, astronomers can only be
certain that Mars has not come this close to Earth
in the Last 5,000 years, but it may be as long as
60,000 years before it happens again.

The encounter will culminate on August 27th when
Mars comes to within 34,649,589 miles of Earth and
will be (next to the moon) the brightest object in
the night sky. It will attain a magnitude of -2.9
and will appear 25.11 arc seconds wide. At a modest
75-power magnification

Mars will look as large as the full moon to the naked eye.
Mars will be easy to spot. At the
beginning of August it will rise in the east at 10p.m.
and reach its azimuth at about 3 a.m.

By the end of August when the two planets are
closest, Mars will rise at nightfall and reach its
highest point in the sky at 12:30a.m. That's pretty
convenient to see something that no human being has
seen in recorded history. So, mark your calendar at
the beginning of August to see Mars grow
progressively brighter and brighter throughout the
month.
Share this with your children and grandchildren.

NO ONE ALIVE TODAY WILL EVER SEE THIS AGAIN

Nice try FD. It's a bucket of two year old horsewad is what it is:

8895: i guess that means i can expect to = not = get a present from you?
well don't expect one from me on your b-day either.

i was wondering how long it would take someone to search up this farce. I'm surprised nobody has seen this before...:~}

email isn't news fossil... but then again either is fox and I bet that you believe them too.
fossil_digger Report This Comment
Date: July 12, 2006 11:56AM

i guess i have to explain something yet AGAIN for toad.
the lesson here is don't believe everything you see or hear....check it out first
Anonymous Report This Comment
Date: July 12, 2006 02:06PM

oh... great coverup homer. Hopefully you learned something but I doubt it.
Anonymous Report This Comment
Date: July 13, 2006 09:47AM

Claim: The planet Mars will make a once-in-our-lifetimes remarkably close approach to Earth in August.

* Mars will pass extraordinarily close to Earth in August 2006: False.

Origins: The piece quoted above is another example of an Mars item that was once true but is now being circulated again, long after the events it describes have come to pass. This article was relevant back in 2003, but it is not applicable now, three years later.

Mars did make an extraordinarily close approach to Earth which culminated on 27 August 2003, when the red planet came within 35 million miles (or 56 million kilometers) of Earth, its nearest approach to us in almost 60,000 years. At that time, Mars appeared approximately 6 times larger and 85 times brighter in the sky than it does ordinarily. (The message quoted above was often reproduced with an unfortunate line break in the middle of the second sentence of the second paragraph, leaving some readers with the mistaken impression that Mars would "look as large as the full moon to the naked eye" and not realizing that the statement only applied to those using viewing Mars through a scope with 75-power
magnification.)

Although Mars' proximity to Earth in August 2003 (referred to as a perihelic opposition) was a rare occurrence, the red planet comes almost as near to us every 15 to 17 years. To the unaided observer, Mars' appearance in August 2003 wasn't significantly larger or brighter than it is during those much more common intervals of closeness.

Mars will have another close encounter with Earth in in 2005, but that occurrence will take place in October (not August), and the red planet will appear about 20% smaller than it did during similar circumstances in 2003.

The Mars phenomenon of 2003 was featured in a couple of articles on the web site Space.com which are still well worth the reading: Mars to Get Closer than Ever in Recorded History in 2003 and Orbital Oddities: Why Mars will be So Close to Earth in August. Interested observers also joined Mars Watch 2003 through the MarsToday.com web site.

ok homer... reread the thread^^ what part of this did I believe?? not any of it... not even your lame ass attempt to cover up for your lack of inte"LL"igence by saying that it was a test after someone busted your dumb ass. Your last comment would be very wise advice for yourself.
fossil_digger Report This Comment
Date: July 14, 2006 08:02PM

so you think i believed this?
perfect example of how clueless you really are.
did i ever claim that it was true? nope
maybe your corrections of spelling might hold some water. ooooooo that's important.

you already won the worst heckler trophy, you don't have to try anymore.

Giving out trophys in your fantasy world now are you? Do you make believe that you are wearing a shiny gold crown too?

do you enjoy making a total fool of yourself?
I know I enjoy watching.
keep 'em comin', beast hasn't been very funny lately

again with the fantasy world.... how many people live inside your head?
fossil_digger Report This Comment
Date: July 25, 2006 01:57AM

fantasy? did i create a false sense of reality for you?
funny you seem to be the only one who is delusional.
smoke another one man, cause you're getting funnier by the day...:~}

i tell you what, since we both seem to have a mutual appreciation for the quality of pictures on the site, i shall return to telling you nice pic. and you can say thank you. or for some sort of self deprivation, you may continue to make a fool of yourself to the world. i suggest my conclusion.

you mean your world? errr... no thanks Homer. Funny how you think of yourself as the world.
kshitiz_saxena Report This Comment
Date: July 25, 2006 10:57AM

There's a rumor about Mars going around the internet. Here are some snippets from a widely-circulated email message:

"The Red Planet is about to be spectacular."

"Earth is catching up with Mars [for] the closest approach between the two planets in recorded history."

"On August 27th … Mars will look as large as the full moon."

And finally, "NO ONE ALIVE TODAY WILL EVER SEE THIS AGAIN."

Only the first sentence is true. The Red Planet is about to be spectacular. The rest is a hoax.

Here are the facts: Earth and Mars are converging for a close encounter this year on October 30th at 0319 Universal Time. Distance: 69 million kilometers. To the unaided eye, Mars will look like a bright red star, a pinprick of light, certainly not as wide as the full Moon.

Disappointed? Don't be. If Mars did come close enough to rival the Moon, its gravity would alter Earth's orbit and raise terrible tides.

Sixty-nine million km is good. At that distance, Mars shines brighter than anything else in the sky except the Sun, the Moon and Venus. The visual magnitude of Mars on Oct. 30, 2005, will be -2.3. Even inattentive sky watchers will notice it, rising at sundown and soaring overhead at midnight.

You might remember another encounter with Mars, about two years ago, on August 27, 2003. That was the closest in recorded history, by a whisker, and millions of people watched as the distance between Mars and Earth shrunk to 56 million km. This October's encounter, at 69 million km, is similar. To casual observers, Mars will seem about as bright and beautiful in 2005 as it was in 2003.

Although closest approach is still months away, Mars is already conspicuous in the early morning. Before the sun comes up, it's the brightest object in the eastern sky, really eye-catching. If you have a telescope, even a small one, point it at Mars. You can see the bright icy South Polar Cap and strange dark markings on the planet's surface.

Above: Painted green by a flashlight, astronomer Dennis Mammana of California points out Mars to onlookers on Aug. 26, 2003, the last time Mars was so close to Earth. Photo credit: Thad V'Soske.

One day people will walk among those dark markings, exploring and prospecting, possibly mining ice from the polar caps to supply their settlements. It's a key goal of NASA's Vision for Space Exploration: to return to the Moon, to visit Mars and to go beyond.

Every day the view improves. Mars is coming--and that's no hoax

no offense to other mentally challenged people out there intended.
brokntoad Report This Comment
Date: July 26, 2006 12:41AM

I'm beginning to think i might be retarded even giving your dumbass the time of day.

but you are too stupid to leave alone.

Toad, you correct his spelling but what the fuck is"EITHER is Fox".
brokntoad Report This Comment
Date: July 27, 2006 08:07AM

duane... that means fox is faux... google may help.

toad, toad, toad, when will you learn? your feeble attempts at humor are quite pathetic.
brokntoad Report This Comment
Date: July 28, 2006 05:18PM

so you're seious? that's even more pitiful!