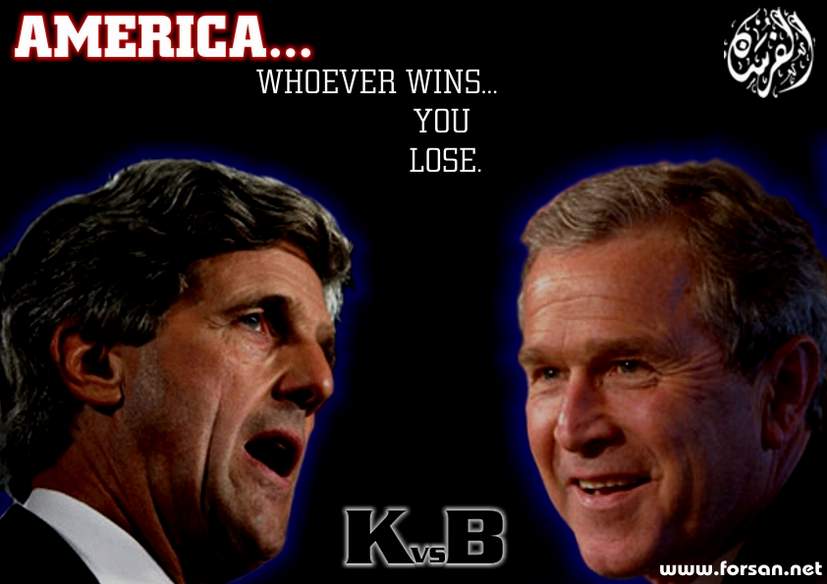 Except for with the donkeys you lose a lot more. Like kept income, and society standards. Well whatever it takes to make a one world government, and get that rainbow swish.
JB Report This Comment
Date: August 27, 2004 03:15AM

That's the beauty of Republicans. They let the people make the country run, and don't expect them to do much. Except repeal the stupidity of the democrats. The Democrats do a lot...for welfare lumps, and trial attorneys.
Scary Report This Comment
Date: August 27, 2004 03:38PM

I'd take Gore any day over either of these 2. even if he did invent the internet yarharhar. but seriously i would
Doucher Report This Comment
Date: August 29, 2004 08:41PM

Well if you or any of your family members need a squirt in there to flush things out just let me know ;-)
Doucher\'s Mom Report This Comment
Date: August 31, 2004 02:39AM

Now Douchie, stop being so rude to Mr. Mint, and go wash your bottom. Your daddy must have been storing up for a while, he left a nice stain all over your shorts. Tell him I said to save some for me.
MMHM Report This Comment
Date: September 13, 2004 02:59AM

i guess you guys think that getting the country into over 300 billion dollars in dept after we had a surplus of money was a good idea...

here are some quotes of our president:

"Free societies are hopeful societies. And free societies will be allies against these hateful few who have no conscience, who kill at the whim of a hat."
- Washington, D.C., Sept. 17, 2004


"That's why I went to the Congress last September and proposed fundamental—supplemental funding, which is money for armor and body parts and ammunition and fuel."
- Erie, Pa., Sept. 4, 2004

"Tribal sovereignty means that, it's sovereign. You're a—you've been given sovereignty, and you're viewed as a sovereign entity. And, therefore, the relationship between the federal government and tribes is one between sovereign entities."
- Washington, D.C., Aug. 6, 2004

"More Muslims have died at the hands of killers than - I say more Muslims - a lot of Muslims have died - I don't know the exact count - at Istanbul. Look at these different places around the world where there's been tremendous death and destruction because killers kill."
- Washington, D.C., Jan. 29, 2004

"So thank you for reminding me about the importance of being a good mom and a great volunteer as well."
- St. Louis, Jan. 5, 2004

"She is a member of a labor union at one point."
—Announcing his nomination of
Linda Chavez as secretary of labor.
Austin, Texas, Jan. 2, 2001

"Our enemies are innovative and resourceful, and so are we. They never stop thinking about new ways to harm our country and our people, and neither do we."
- Washington, D.C., August 5, 2004

"The recession started upon my arrival. it could have been - some say February, some say March, some speculate maybe earlier it started - but nevertheless, it happened as we showed up here. The attacks on our country affected our economy. Corporate scandals affected the confidence of people and therefore affected the economy. My decision on Iraq, this kind of march to war, affected the economy."
- Meet the Press, Feb. 8, 2004

"They want the federal government controlling Social Security like it's some kind of federal program.
—St. Charles, Mo., Nov. 2, 2000

"First, we would not accept a treaty that would not have been ratified, nor a treaty that I thought made sense for the country."
—On the Kyoto accord in an interview
with the Washington Post, April 24, 2001