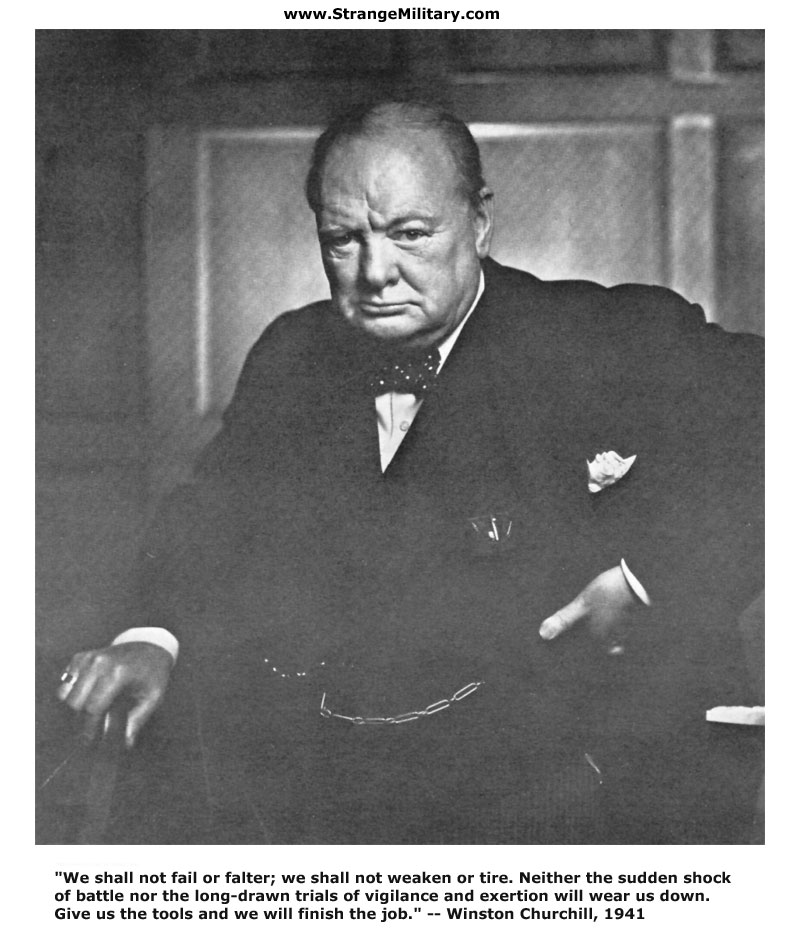 He was a brilliant motivator and was
supremely intelligent on how to lift his
peoples spirits.Churchill and Hitler were both
incredible with their ability to make their
fellow countrymen beleive they could acheive
anything.

One last thing.I think i skipped school on the
day when they taught that whole "I before E except
after C thing lol".

o.k. i cheated on these:

A fanatic is one who can't change his mind and won't change the subject.

A love for tradition has never weakened a nation, indeed it has strengthened nations in their hour of peril.

All great things are simple, and many can be expressed in single words: freedom, justice, honor, duty, mercy, hope.

Although prepared for martyrdom, I preferred that it be postponed.

An appeaser is one who feeds a crocodile - hoping it will eat him last.

An appeaser is one who feeds a crocodile, hoping it will eat him last.

Broadly speaking, the short words are the best, and the old words best of all.


Every day you may make progress. Every step may be fruitful. Yet there will stretch out before you an ever-lengthening, ever-ascending, ever-improving path. You know you will never get to the end of the journey. But this, so far from discouraging, only adds to the joy and glory of the climb.


From now on, ending a sentence with a preposition is something up with which I will not put.

He has all the virtues I dislike and none of the vices I admire.

- More quotations on: [Vices]
History will be kind to me for I intend to write it.

I cannot pretend to feel impartial about colours. I rejoice with the brilliant ones and am genuinely sorry for the poor browns.

I have always felt that a politician is to be judged by the animosities he excites among his opponents.

I like pigs. Dogs look up to us. Cats look down on us. Pigs treat us as equals.

It has been said that democracy is the worst form of government except all the others that have been tried.

It is a mistake to try to look too far ahead. The chain of destiny can only be grasped one link at a time.

It's not enough that we do our best; sometimes we have to do what's required.

Men occasionally stumble over the truth, but most of them pick themselves up and hurry off as if nothing ever happened.

Never hold discussions with the monkey when the organ grinder is in the room.

Never, never, never believe any war will be smooth and easy, or that anyone who embarks on the strange voyage can measure the tides and hurricanes he will encounter. The statesman who yields to war fever must realize that once the signal is given, he is no longer the master of policy but the slave of unforeseeable and uncontrollable events.

One ought never to turn one's back on a threatened danger and try to run away from it. If you do that, you will double the danger. But if you meet it promptly and without flinching, you will reduce the danger by half.

Personally I'm always ready to learn, although I do not always like being taught.

Success is the ability to go from one failure to another with no loss of enthusiasm.


The price of greatness is responsibility.

The reserve of modern assertions is sometimes pushed to extremes, in which the fear of being contradicted leads the writer to strip himself of almost all sense and meaning.

There are a terrible lot of lies going around the world, and the worst of it is half of them are true.

To build may have to be the slow and laborious task of years. To destroy can be the thoughtless act of a single day.

When I am abroad, I always make it a rule never to criticize or attack the government of my own country. I make up for lost time when I come home.

When the eagles are silent, the parrots begin to jabber.

Don't talk to me about naval tradition. It's nothing but rum, sodomy and the lash.
(attributed)

We shall not fail or falter; we shall not weaken or tire...Give us the tools and we will finish the job.
BBC radio broadcast, Feb 9, 1941

I would say to the House, as I said to those who have joined this Government: 'I have nothing to offer but blood, toil, tears, and sweat."
Hansard, May 13, 1940


So they [the Government] go on in strange paradox, decided only to be undecided, resolved to be irresolute, adamant for drift, solid for fluidity, all-powerful to be impotent.
Hansard, November 12, 1936

It is a good thing for an uneducated man to read books of quotations.
My Early Life, 1930

I am prepared to meet my Maker. Whether my Maker is prepared for the great ordeal of meeting me is another matter.
on the eve of his 75th birthday

I am reminded of the professor who, in his declining hours, was asked by his devoted pupils for his final counsel. He replied, 'Verify your quotations.'
quoted in Rudolf Flesch, ed., "The New Book of Unusual Quotations" (NY: Harper & Row, 1966), p. 311


I cannot forecast to you the action of Russia. It is a riddle wrapped in a mystery inside an enigma: but perhaps there is a key. That key is Russian national interest.
Radio speech, 1939

Here is the answer which I will give to President Roosevelt... We shall not fail or falter; we shall not weaken or tire. Neither the sudden shock of battle nor the long-drawn trials of vigilance and exertion will wear us down. Give us the tools and we will finish the job.
Radio speech, 1941

It is a good thing for an uneducated man to read books of quotations. Bartlett's Familiar Quotations is an admirable work, and I studied it intently. The quotations when engraved upon the memory give you good thoughts. They also make you anxious to read the authors and look for more.
Roving Commission: My Early Life, 1930, Chapter 9


One day President Roosevelt told me that he was asking publicly for suggestions about what the war should be called. I said at once 'The Unnecessary War'.
Second World War (1948)

For myself I am an optimist - it does not seem to be much use being anything else.
speech at the Lord Mayor's banquet, London, November 9, 1954


From Stettin in the Baltic to Trieste in the Adriatic an iron curtain has descended across the Continent.
Sir Winston Churchill, Speech in March 1946
Now this is not the end. It is not even the beginning of the end. But it is, perhaps, the end of the beginning.
Speech in November 1942

A love of tradition has never weakened a nation, indeed it has strengthened nations in their hour of peril; but the new view must come, the world must roll forward.
speech in the House of Commons, November 29, 1944

> Never, never, never believe any war will be smooth and easy, or that anyone who embarks on the strange voyage can measure the tides and hurricanes he will encounter. The statesman who yields to war fever must realize that once the signal is given, he is no longer the master of policy but the slave of unforeseeable and uncontrollable events.

That should be repeated every morning to certain world leaders, who seem to have forgotten history and are thus doomed to repeatit.

Just make sure he is told when the bombers are on the way ,so he can get outa town.