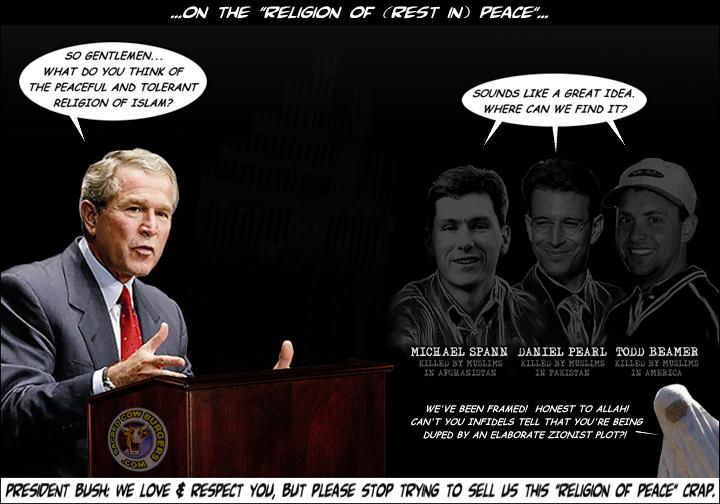 All Religion is violent to one extent or another. Christians all but wiped out the native Americans because they felt that the savages were on their god given land.The U.S goverment used one of the first known recorded Chemical weapons on indian blankets that were handed out and caused their deaths.
And the U.S is the only country to drop nuclear weapons on civilian populations.
But i guess that don't count does it....

Just a note there Max, don't forget about the well documented "toss the diseased cattle/plague victims into the besieged castle" tricks.... for all their faults dont pin the tag of being the first to use biological warfare on the US government... that trick has ben around for centuries.
Anonymous Report This Comment
Date: August 01, 2006 03:21PM

Seems to me, those boys wouldn't have gotten shot if they hadn't been sent to Iraq.
Now, why were they sent to Iraq again?
-No WMDs.
-No link btwn Saddam and Qaeda
-Saddam was OUR dictator in the first place.
-Saudi's crashed planes into the WTC.

Why are we in Iraq again? ...using uranium weapons? Polluting the landscape for the foreseeable future?

Maybe the reason we Screwed the Taliban, Saddam and next in line Iran is "PAYBACK", so the next time those ragheads wanna fuck with us they know what to expect.
Anonymous Report This Comment
Date: August 01, 2006 11:49PM

considering the CIA created the Taliban to takeover Afghanistan in the post Soviet invasion, the taliban were friends of the US.

the CIA put the Baathe party into power in Iraq to control the Shia muslims. Saddam Hussein was never posed a nuclear or military threat to the US.

Saddam was the same threat that all assets of the CIA that start talking pose to the US.

The "War on Terror" is about cleaning up old assets of the CIA. So they don't tell the world their secrets.

are you finally seeing the reason for Iraq and Afghanistan?
we are lining up Iran, it has nothing to do with house cleaning.
the others are nothing more than foot-holds.
there's no conspiracy to cover anything up, in fact it's quite obvious and out in the open. but people still try to say or make people think it's some sort of bush family conspiracy, macho b.s.
open your eyes and see the big picture.

saddam got too big for his britches and refused to cooperate, so see ya!
a really sad thing about arabs is they claim that killing another arab is against their religion, yet they do it all the time. it's only wrong if it doesn't serve their cause.

does anyy of this sink in and make sense? or are you guys still on the discredit quest of the bush's?

[email protected] said:
"Maybe the reason we Screwed the Taliban, Saddam and next in line Iran is "PAYBACK", so the next time those ragheads wanna fuck with us they know what to expect." (makes sense to me)
then Beast said: "the CIA told the Taliban to be good boys and don't cause any trouble, then they told Saddam to be a good boy too and don't do anything bad (SOUNDS LIKE BULLSHIT TO ME)"
;and next beast gonna want my "nutz"

Patrick Henry approaches and punches Al-Zarqawi in the nose and shouted, "You wanted to end our liberties but you failed."

James Madison enters, kicks Al-Zarqawi in the balls and said, "This is why I allowed our government to provide for the common defense!"

Thomas Jefferson comes in and proceeds to beat Al-Zarqawi many times with a long cane and said, "It was evil men like you that provided me the inspiration to pen the Declaration of Independence!".

These beatings and thrashings continued as John Rudolph, James Monroe and 66 other early Americans came in and unleashed their anger on the Muslim
terrorist leader.

As Al-Zarqawi lays bleeding and writhing in unbearable pain an Angel appears . Al-Zarqawi, weeping in pain, says to the Angel, "This is not what
you promised me."

The Angel replies, "I told you there would be 72 Virginians waiting for you in heaven. What did you think I said?


The current leaders of Iran were never assets of the CIA so no housecleaning is needed there.

Learn something about islam before quote it.

It is perfectly acceptable to kill another arab if they have committed an offense against Allah.

To vindicate allah the wrong doer must be punished.

This same idea runs through all of the other religions including christianity.

Al-Zarqawi would have kicked your ass from sea to sea. And twice on sunday.

true, but they still use the excuse that they can't kill fellow Muslims as a diversion from the real picture. that being that they can't kill them or extricate them due to the fact that they are of the same religion. people who haven't read the koran don't know this , and that's what they are counting on, the minority/majority
it's like a human shield.
then when that shield is killed, they are paraded in front of the cameras claiming it was the infidels who killed them, when in fact it was the shielders fault that person is no longer breathing.

Secular muslims like the Lebanese leaders would say "they can't kill them or extricate them due to the fact that they are of the same religion".

fundeamentalist muslims would not say that.

Lebanon is 70% Sunni and Shia muslim. Both have their fundamentalist factions. These people dominate the military force population of Lebanon. Which means they will not fire on Lebanese citizens because of their religion.

So called "terrorist" acts are military strikes by poor people. Take a step back from the US, it will leave you smelling like a shit.

sorry i didn't clarify that. i keep trying to think the fundementalists have a chance at reality.
i understand perfectly what's going on, it's people that twist reality around that piss me off
Anonymous Report This Comment
Date: August 02, 2006 05:11AM

When I saw this pic I knew it would set off a firestorm, love this site for that reason, I love to see people jump on a flaming sword..get it on guys..
Toucan Report This Comment
Date: August 02, 2006 07:08AM

fossil said:
-- the others are nothing more than foot-holds.
-- saddam got too big for his britches and refused to cooperate, so see ya!

So the US (a) calls the shots and everyone must comply? If they don't comply with US demands, then they get attacked? Hmm, interesting take on foreign policy there Fossil. Sounds pretty fucking arrogant, actually.

And (b) Iraq and Afghanistan are "footholds" to attack Iran? Whoa chum. So the USofA, "bastion of democracy" will kill tens of thousands of civilians in other countries in order to attack another country. That makes no sense whatsoever.

No my friend: We are in Afghanistan so that the oil companies can get at the Caspian basin oil/gas deposits before the Chinese and Ruskies do. The US doesn't care if we kill a few wedding parties, or lots of children to do it. Just look at the facts, Karzai approved a brand new pipeline across "his" land shortly after being installed.

We are in Iraq for a few reasons:
1. Attempt to fuck with China's interest in oil/gas in the region.
2. Bad attempt to 'control' OPEC.
3. Back up Israel so they can reassert their military dominance of the area.
4. Sell off Iraq's state-owned assets (which they have done) to American corporations, at "fire sale" prices. Bremmer did that before he left.
5. Lock down the population the US so that they are occupied with bullshit "patriotism", and give a freer hand to the police powers in the US so that they can arrest whomever they please, particularly political dissent "troublemakers", and people who will take a stand for what they believe.

the only oil card you can pull is that we do not want Iran to control the major % of production.

Israels dominance? of what?

claiming that the U.S. doesn't care about the deaths of civilians is the argument of a fool.

and yes the U.S. does call the shots. nothing and i mean nothing gets done in the world without the U.S.'s consent. why do you think there has been no cease fire? because we aren't done using the Israeli's to smash Hezbollah. bush is tired of taking all the responsibility for the deaths of Arabs in the region. he thinks by letting Israel front some of the responsibility that the real reason we are there will fall by the wayside, thus strengthening our populations resolve and the Arab balls to realize that these fanatical regimes are still in the stone age.

until the Arab community understand that this kind of path will not be tolerated by the world community, there will be no compensation, no Nada. but in fact will lengthen their world of persecution and their separation from the world.

when the shit hits the fan, no matter of what people think of the U.S. who do they call?

these countries have never lived in a "free" country and do not know what it's all about. they think everyone does whatever the hell they want, when in fact the U.S. has some of the strictest laws in the world.

The Democrats are the empiricists in this reality fossil fugg....

Sorry to disappoint you but if you get your head out of your own ass, your perspective improves....

i see yours are permanently attached