A Time for all of us to Pray!! 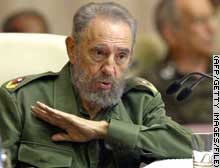 Pray for Fidel? This old bastard should have
been assasinated by his people long ago.
Anonymous Report This Comment
Date: August 07, 2006 08:50AM

true, he is not, but he has succeeded in keeping his country isolated and frozen in time...
Anonymous Report This Comment
Date: August 07, 2006 05:01PM

dictator? bush? someone has a fucked up dictionary, or a lack of education.
Anonymous Report This Comment
Date: August 07, 2006 06:11PM


[email protected] actually the US is the country that has kept Cuba frozen in time with trade embargos. Otherwise Cuba would have moved toward democracy faster.

CRAPPER .. Every day that the BUSH admin and the NEOCON crew have the US military killing innocent people around globe, the more people lose faith in the intregrity of the US for the future. They think we are full of shit when we make a mountain out of a molehill.

A stupid person thinks that arresting or killing all drug dealers today will eliminate the drug trade. Why because a new drug dealer will be on the corner tomorrow.

Just as a stupid person thinks that by capturing or killing all "terrorists" today will end terrorism. Why? because new "terrorists" are created every time someone misuses their power. The US has misused its power for decades.

Only through treating people with dignity shall any modicum of peace be achieved.


so cuba is frozen in time because we don't deal with them?

or is it fidel's fault that people don't like doing business with dictators?

is condi rice a neocon, by your definition?

or has she been dipped in chocolate?

drug dealers: i guess you haven't ever bought any drugs in the last 30 years to notice the difference in price? yeah we haven't affected the drug trade whatsoever (snicker.....cough)

it is quite amazing to me that anyone would ever think you had something significant to say about anything other than what it feels like to wear a straight jacket, or maybe how to keep a constant drool from drying out your mouth.

liberals have forsaken their country and the world for some sort of unachievable political reclamation.
let's just send the world a big hug and they will fall into line
aDCBeast Report This Comment
Date: August 08, 2006 04:38PM


Condi Rice makes no decisions. NONE. and yes she has been dipped in chocolate.

BTW .. being white is not a prerequisite for being a NEOCON.

More illegal drugs are sold today (quantity and volume) in the US than ever before. The difference is that more people are buying driving up the cost. Hence the higher cost.

Law enforcement officials from top to bottom say we are losing the drug war because the money is too big. The dealers have better technology and users want the shit badly.

You should look up things before you open your mouth about them.

i wanted to provoke a little truth out of you. i didn't think there was any, but you proved me wrong
Anonymous Report This Comment
Date: August 08, 2006 04:44PM

ah... thanks for shining your bright light of insight again, Beast... and, of course, for straightening us all out...
Anonymous Report This Comment
Date: August 11, 2006 06:07AM

You can't even PROVOKE the truth out of a liberal like DC. All he wants to do is hate Bush and babble shit from his warped viewpoint. That's what good men have died for, so he can be an asshole and a loudmouth and still walk the streets in freedom. He has the right to free speech but we don't have to be so gullible as to believe his rants..