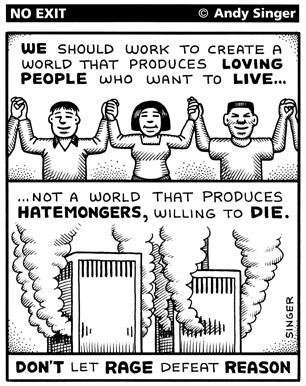 *snif* Thank you, our Pommie friends....
That was a nice thing to do.

- New Year's Day in the Coptic and the Ethiopian calendars,
- National Day of Catalonia,
- Teacher's Day in parts of Latin America.

* 1297 - Scots under William Wallace defeated English troops in the Battle of Stirling Bridge.

* 1857 - Paiutes and Mormon militias killed about 120 California-bound pioneers in a wagon train in the Mountain Meadows massacre.

* 1973 - A military coup in Chile headed by Augusto Pinochet overthrew the government of President Salvador Allende.

* 2001 - September 11 attacks: Three passenger airliners were hijacked to destroy the World Trade Center in New York City and part of The Pentagon in Washington, D.C.; a fourth aircraft crashed in Pennsylvania. In total, almost 3,000 people were killed.