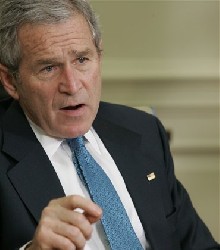 Fuck you, you liberal pussy. You just hate America and want our troops to die so you can surrender to the terrorists. Bush is a great leader. Just ask Bill O'Reilly, Rush Limbaugh, Anne Coulter or any other EDUCATED conservative you meet. In the meantime, Al Franken and Air America are shutting down because nobody wants to hear your uninformed, socialist rants against our commander-in-chief.

You're helping to embloden the enemy by bad-mouthing our leader during war. In the past, treason during war was punishable by death. It's just too bad that times have changed.

It is becoming more and more apparent that people who were unqualified
to work for the Bush administration and hence, not hired,have found a
forum to vent their belief that "It's Bush's fault" they're unemployed.
Maybe if you believed in America and it's founding beliefs, you would
be employed instead of having time to blame someone else on here.

If Hilary Clinton wins in '08, just fasten your seatbelts, we will be in for a very bumpy ride. I only hope the death toll will not be too high.
fossil_digger Report This Comment
Date: February 17, 2007 10:11PM


You are a moron.

WTF are you talking about people not being hired to work for the Bush admin ? If you wouldn't do exactly as you are told by Bush team then you won't get hired by the Bush team. And that's whether you are republican or democrat.

That is why the Bush team hired 24yr olds right of college to go to Iraq and head intelligence operations without ever having a job before in their entire life.


Air America is shutting down because liberals don't pray to people on radio and tv like conservative lemmings like yourself.

I'm sure it's negative 'cause i've never heard you agree w/ anyone.

I actually feel pity for you, hope you find peace with yourself.

News Flash: Bible-thumping conservatives shouldn't be viewing artistic photos or adult material on the Internet. It is contrary to those "moral, family values" that they want to push down everyones' throats.

While our civil liberties have eroded over the past six years, the Bush administration has passed oppressive laws like the ridiculously-named "Patriot Act." And anyone who criticizes Bush or complains about how things are going is immediately accused of wanting to "surrender to the terrorists" or "hating the military and not supporting the troops" or other such nonsense.

Bravo Republicans. You've done a masterful job of fucking up the country and making it look like your opposition's fault. Unfortunately, there are still a few people with half a brain who have figured out your bullshit manipulation and propoganda.

The government and sepcial interests have been trying to tell us what to do for several decades through many administrations, not just republicans. Learn to blame the right people, the American public. It is the American public as a whole who bring all this down upon us by supporting things which they may have no personal stake in, like seatbelt laws, lower speed limits, smoking, helmets on motorcycles, gun control, adult material and more. When we allow the govenment to control something that has no affect on us, which we don't care about, we give them the power to control other things which we may care about. Personal choice has slowly been erroded away because the silent majority have remained silent and the vocal minority on all issues have been the only ones heard. You cannot put the blame on the people in power because it is their nature any more than you can blame a snake for being a snake. We put them in power and by our actions or inactions we give them more and more power. Wheather they are republican or democrat, they will gladly take all the power we give them. We as a people have become too lazy to raise our children so we ask the government to control what our kids are allowed to see and do instead of us as parents telling them no. I want to decide what to watch on TV, or where I shall smoke, or if I will wear a seatbelt, or if I will wear a helmet. When we allow the government to legislate these decisions for us on the ones we don't care about we give them permission to do it for everything else. It is not the republicans or the democrats, it is all of us who are too lazy or just don't care nough about something to write our congressmen and tell them what we think. It is all of those who say, yes let them make everyone fasten their seatbelts, I always fasten mine so it will not effect me. Think about it, what have you done to stand up for something you have no personal stake in? Remember, the next one to be taken away from us might just be something very dear to you.
Anonymous Report This Comment
Date: February 18, 2007 02:26PM

Everyone has a personal stake in seatbelt laws because deaths on the highways cause huge traffic jams and cost taxpayers billions of dollars every year.

It's all right here:
[www.nhtsa.dot.gov]

that is why you have people who think they are in an elite class, like George the moron, attempt to make big decisions for the masses of americans. However, it takes a great person to do this. Someone who is truly selfless and considers more than their personal opinion. You must reason as if you don't exist to arrive at the truth. Therefore no personal biases enter your thought processes. The truly bright and disciplined can do this. Most can't.

Unfortunately for the world and america, 1) There are not many people like this (George Bush being a egomaniacal moron) and 2) the truly brilliant eg. Socrates, Aristotle, DaVinci, Galileo, Einstein, Chomsky, etc. are fought by the socalled elite (elite in america means "my daddy has money versus "I am brilliant"

because they are on a lower level of intelligence. Yes you can go to Harvard and Yale and be stupid. W is living proof.

No matter how educated a society becomes the citizens always follow. The key to a successful society is making sure that the people who lead have been cultured beyond personal and public prejudice.

What should scare any american is to elect some fool for president who fits the idea that "he's one of us". That means you have a follower as a leader and are probably going to have some bad times ahead. That is why W was such a bad choice and six years later we are where we are.

"Fuck you, you liberal pussy. You just hate America and want our troops to die so you can surrender to the terrorists. Bush is a great leader. Just ask Bill O'Reilly, Rush Limbaugh, Anne Coulter or any other EDUCATED conservative you meet. In the meantime, Al Franken and Air America are shutting down because nobody wants to hear your uninformed, socialist rants against our commander-in-chief.

Also lowlife, if there was a law in place like that you would be first on their list because after talking that shit right out in the open like that they would have YOU taken out.... Why, because what you're wishing for is "no free speech allowed".

Hopefully you're a punk kid, that way at least there is a slight hope there, if not, well you know already. Hate like that will eat you up inside, so at least we've got something going for us. (If you can't understand any of this, here...

And fossil I think this "Fuck you, you liberal pussy." was directed toward, of all people, you, well that's what you have FOR support.

did some one just call me a liberal?

he must be new here.

Are you part of the above mentioned 20%, or the 75%...and quit being
jealous of Fossil.

I'm in an even bigger minority. The 1% that never finished the 3rd grade.

WTF? I am not Anonymous when I lambaste Fossil_Crapper. I also don't use gay animated graphics in my posts.

You are a piss poor judge of people. No wonder you you like W.

Seatbelts is a prime example of personal choice being taken away from us. Not wearing a seatbelt only hurts the person not wearing them and does not hurt anyone else. If you notice there are no mention of accidents where wearing the seatbelts killed the victims, only the ones where they did not wear the seatbelts. Try and find an account of an accident where a person did not wear a seatbelt and was thrown out of the viehicle and killed someone else, you can't, so not wearing seatbelts do not harm anyone else. You people who support this are in favor of giving your rights away because it doesn't affect you. When you give one away all the rest are in danger.
madhatter Report This Comment
Date: February 21, 2007 12:33AM

Ah,Beast.... If you did make it out of second grade,And you grew up in
Arkansas, you were an honor student. Congratulations!

You state that you don't use gay animation, yet you call me "Madfagger?"

Perhaps,in retrospect, you didn't grow up in Arkansas? You are just
a third grade dropout? The liberals have provided many government
programs for people such as yourself...take advantage!
Then, blame it on bush, cause it's his fault.

You have shown your true lack of knowledge on any subject again.

The reason it is mandatory to wear seat belts, helmets on a bike, and children ride in safety seats is NOT because the person in them or wearing them would be hurt.

The main reason these are required is to keep the negotiated medical premiums lower for anyone that gets into motor vehicle and to keep EMS costs low for local governments.

You truly are a moron.

This is why smoking in public places has become banned. Medical costs.

It should be the reason that governments should force most people to lose weight. The rise in medical costs correlates to the rise in obesity since 1990.

I'm not against personal liberty. Drive without a seatbelt. Climb mount Everest. I don't care.

But you have to self insure. If you can't self insure and you depend on the conveniences that being a member of the general populace gives you then you have to be safer.

that was a good one!

just exactly when was that? poke poke

But the seatbelt law never mentions insurance, it just states we all have to wear them. Another personal choice given away. If you can't stand up for all personal liberties or all rights then you have no right to stand up for any. When you give away liberties for the small things then you have no right to keep the big ones.
aDCBeast Report This Comment
Date: March 21, 2007 02:26AM


The speeding laws don't mention insurance but it is reason they exist.