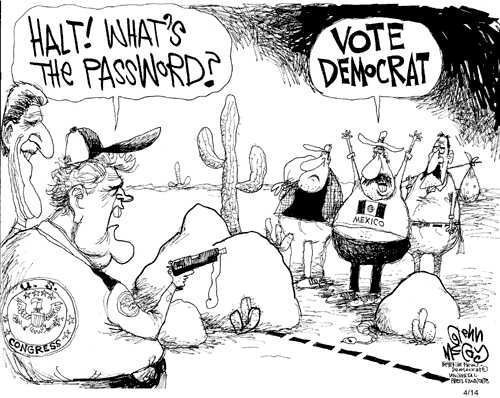 Too bad the Democrates have been out of the congress since 20o0 and the TOTALY REPUBLICAN congress hasnt addressed the prob......still to date . HEHE
Anonymous Report This Comment
Date: July 20, 2007 04:35AM

The key is all Politicians are scamming to open up the borders!
Anonymous Report This Comment
Date: July 20, 2007 04:46AM

Why are people so stupid?

You guys pick a side and then act all self righteous..... what fools!

It doesn't matter which "side" you pick it still all goes to the same people..... not us, quit feeding them.

It's called! Divide and Conquer...... split you into at least two groups and create competition, then they go about their day with "Business" while you don't pay attention to it.

With only Kennedy and what appears to be Carey depicted here and with Bush noticeably in absence it would appear to be making the point that the Democratic party stood to gain the most by the failed amnesty bill since both Democrats and Republicans both know the bulk of these voters would be/vote Democratic.

Please send this on to as many people as you can..
You've got to read this all the way through to the bottom.

I HEREWITH FIRMLY STATE THAT I WILL NOT VOTE FOR ANY POLITICIAN, REGARDLESS OF TH E OTHER ISSUES, IF HE DOES NOT SPONSOR AND SUPPORT THE FOLLOWING LEGISLATION. THAT INCLUDES EVERYONE STANDING FOR ELECTION IN 2008.
LET US SHOW OUR LEADERS IN WASHINGTON "PEOPLE POWER" AND
THE POWER OF THE INTERNET. LET ME KNOW IF YOU ARE WITH ME ON THIS BY FORWARDING TO EVERYONE IN YOUR ADDRESS BOOK.

IT DOESN'T MATTER IF YOU ARE REPUBLICAN OR DEMOCRAT!


GET A BILL STARTED TO PLACE ALL POLITICIANS ON SOC. SEC.

(This is worth reading. It is short and to the point.)


Perhaps we are asking the wrong questions during election years.


Our Senators and Congresswomen do not pay into Social
Security and, of course, they do not collect from it.


You see, Social Security benefits were not suitable for persons of their rare elevation in society . They felt they should have a special plan for themselves. So, many years ago they voted in their own benefit plan.


In more recent years, no congressperson has felt the need to change it. After all, it is a great plan.

For all practical purposes their plan works like this:

When they retire, they continue to draw the same pay until they die.


Except it may increase from time to time for cost of living adjustments..


For example, Senator Byrd and Congressman White and their wives may expect to draw $7,800,000.00 (that's Seven Million, Eight-Hundred Thousand Dollars), with their wives drawing $275, 000.00 during the last years of their lives.

This is calculated on an average life span for each of those two Dignitaries.


Younger Dignitaries who retire at an early age, will receive much more during the rest of their lives.


This little perk they voted for themselves is free to them. You and I pick up the tab for this plan. The funds for this fine retirement plan come directly from the General Funds;


From our own Social Security Plan, which you and I pay (or have paid) into, every payday until
we retire (which amount is matched by our employer). We can expect to get an average of $1,000 per month after retirement. Or, in other words, we would have to collect our average of $1,000 monthly benefits for 68 years and one (1) month to equal Senator! Bill Bradley's benefits!

Social Security could be very good if only one small change were made. That change would be to:
Jerk the Golden Fleece Retirement Plan from under the Senators and Congressmen. Put them into the Social Security plan with the rest of us Then sit back.....And see how fast they would fix it.

If enough people receive this, maybe a seed of awareness will be planted and maybe good changes will evolve.

To the above poster..why don't you try finding out if something or not before posting it.


Thanks for clarifiying that for us but truth is not a requirement for some people on this site, as you may have seen. Emails like those represented above go directly to trash when they hit my computer so I have never seen any of them. People have to stop believing everything they see on the internet, anyone can put anything they like on emails and websites without any oversight at all.

No. The guy's right. Their retirement is paid for as is their health insurance.

The Declaration of Independence and the Constitution that these slimeballs keep trying to twist into a pretzel clearly says that when we, the people, catch they, our representatives doing what they've been up to now (clearly) for the last six or so years, we need to oust them and start over.

Impeach them. Before they REALLY DO own you lock stock and barrel.

I do not believe the accusation but even if it were true, getting rid of them and starting over would not change anything. Cleaning house and putting new people in would just allow the new ones to enjoy the same things the old ones did unless the laws were changed first and that is not going to happen. The only way to do it at all would be to get rid of all our laws and government entirely and start over and that will never happen.