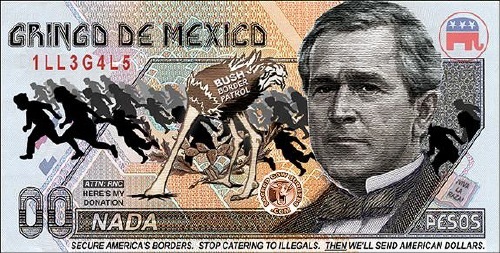 Don't vote for Presidential Candidates that are for Globalization!

What Presidential Candidates are part of the CFR? What are they trying to accomplish?

Who Opposes the CFR?
Ron Paul

The Amero is coming, you dicks act tough but when the shit goes down you just sit there and say.."well, there's nothing we can do about it now!" Maybe you shouldn't have ignored it... last to act, first to complain.

The next generation will spit on your graves.

By that time Ron Pauls grandson will suck Lib c**k

Don't talk down on them, they served you!

Why we're against the war

Q: Why are veterans, active duty, and National Guard men and women opposed to the war in Iraq?

A: Here are 10 reasons we oppose this war:

1. The Iraq war is based on lies and deception.
The Bush Administration planned for an attack against Iraq before September 11th, 2001. They used the false pretense of an imminent nuclear, chemical and biological weapons threat to deceive Congress into rationalizing this unnecessary conflict. They hide our casualties of war by banning the filming of our fallen's caskets when they arrive home, and when they refuse to allow the media into Walter Reed Hospital and other Veterans Administration facilities which are overflowing with maimed and traumatized veterans.
For further reading: www.motherjones.com/bush_war_timeline/index.html

2. The Iraq war violates international law.
The United States assaulted and occupied Iraq without the consent of the UN Security Council. In doing so they violated the same body of laws they accused Iraq of breaching.
For further reading:
[www.yale.edu]
[www.westpointgradsagainstthewar.org]

3. Corporate profiteering is driving the war in Iraq.
From privately contracted soldiers and linguists to no-bid reconstruction contracts and multinational oil negotiations, those who benefit the most in this conflict are those who suffer the least. The United States has chosen a path that directly contradicts President Eisenhower's farewell warning regarding the military industrial complex. As long as those in power are not held accountable, they will continue...
For further reading:
[www.commondreams.org]
[www.publicintegrity.org]

4. Overwhelming civilian casualties are a daily occurrence in Iraq.
Despite attempts in training and technological sophistication, large-scale civilian death is both a direct and indirect result of United States aggression in Iraq. Even the most conservative estimates of Iraqi civilian deaths number over 100,000. Currently over 100 civilians die every day in Baghdad alone.For further reading:
[www.nomorevictims.org]
[www.guardian.co.uk]
[DDA10894DE404482" rel="nofollow" >select.nytimes.com]

5. Soldiers have the right to refuse illegal war.
All in service to this country swear an oath to protect and defend the Constitution of the United States against all enemies, both foreign and domestic. However, they are prosecuted if they object to serve in a war they see as illegal under our Constitution. As such, our brothers and sisters are paying the price for political incompetence, forced to fight in a war instead of having been sufficiently trained to carry out the task of nation-building.
For further reading:
[thankyoult.live.radicaldesigns.org]
[youtube.com]
[youtube.com]
[girights.objector.org]

6. Service members are facing serious health consequences due to our Government's negligence.
Many of our troops have already been deployed to Iraq for two, three, and even four tours of duty averaging eleven months each. Combat stress, exhaustion, and bearing witness to the horrors of war contribute to Post Traumatic Stress Disorder (PTSD), a serious set of symptoms that can lead to depression, illness, violent behavior, and even suicide. Additionally, depleted uranium, Lariam, insufficient body armor and infectious diseases are just a few of the health risks which accompany an immorally planned and incompetently executed war. Finally, upon a soldier's release, the Veterans Administration is far too under-funded to fully deal with the magnitude of veterans in need.
For further reading:
[www.ncptsd.va.gov]
[www.vets4vets.us]

7. The war in Iraq is tearing our families apart.
The use of stop-loss on active duty troops and the unnecessarily lengthy and repeat active tours by Guard and Reserve troops place enough strain on our military families, even without being forced to sacrifice their loved ones for this ongoing political experiment in the Middle East.
For further reading: [www.military.com]

8. The Iraq war is robbing us of funding sorely needed here at home.
$5.8 billion per month is spent on a war which could have aided the victims of Hurricane Katrina, gone to impoverished schools, the construction of hospitals and health care systems, tax cut initiatives, and a host of domestic programs that have all been gutted in the wake of the war in Iraq.
For further reading:
[www.costofwar.com]

9. The war dehumanizes Iraqis and denies them their right to self-determination.
Iraqis are subjected to humiliating and violent checkpoints, searches and home raids on a daily basis. The current Iraqi government is in place solely because of the U.S. military occupation. The Iraqi government doesn’t have the popular support of the Iraqi people, nor does it have power or authority. For many Iraqis the current government is seen as a puppet regime for the U.S. occupation. It is undemocratic and in violation of Iraq’s own right to self-governance.
For further reading:
[riverbendblog.blogspot.com]
10. Our military is being exhausted by repeated deployments, involuntary extensions, and activations of the Reserve and National Guard.
The majority of troops in Iraq right now are there for at least their second tour. Deployments to Iraq are becoming longer and many of our service members are facing involuntary extensions and recalls to active duty. Longstanding policies to limit the duration and frequency of deployments for our part-time National Guard troops are now being overturned to allow for repeated, back-to-back tours in Iraq. These repeated, extended combat tours are taking a huge toll on our troops, their families, and their communities.
For further reading:
[www.latimes.com]

Q: Why do Iraq Veterans Against the War call for the immediate withdrawal from Iraq?

A: There are several reasons why immediate withdrawal is the critical first step toward solving the problems in Iraq.

1. The reasons and rationale given for the invasion were fraudulent.
There were no Weapons of Mass Destruction in Iraq during the time of the invasion according to US officials and former chief UN weapons inspector Hans Blix. The idea that Al Qeada and the 9/11 terrorist attacks were connected to Saddam Hussein and the Baath party were proven false in the 9/11 Commission Report. Members of the Bush Administration have admitted that they “misspoke” in the run up to the war.

2. The presence of the US military is not preventing sectarian violence.
The US occupation of Iraq has proven to be unable to prevent sectarian violence and halt an escalation towards a civil war. Despite having an average of 140,000 troops in country since the occupation began, internal violence and attacks against civilians and Iraqi security forces have been on a steady incline.

3. The occupation is a primary motivation for the insurgency and global religious extremism.
The insurgency can be broken down into many individually named factions with various goals, beliefs, and techniques. However, our membership of veterans believe that the occupation of Iraq is the primary thing encouraging the insurgency and giving it legitimacy in the eyes of many Iraqis. Likewise, other people of the Islamic faith are encouraged to resist America ’s policies internationally based on how they perceive our military operations in the Middle East.

4. We can no longer afford to fight this war of choice.
The financial burden is destroying our domestic programs that could be used to protect us from natural disasters, provide medical programs, or help improve education. We are jeopardizing the US economy and putting strains on the budgets of important government agencies like the Veterans Affairs Department.

5. National security is compromised.
Funds that could be used to protect our ports and transportation are being stripped away while our National Guard units are on constant deployments instead of being used to protect and defend us here at home.

6. The world is becoming more dangerous.
International terrorist attacks have increased and it has become more dangerous for Americans to travel abroad. Approval for US policy has decreased and the dislike of Americans has increased.
7. Our national “moral authority” is being undermined.
The US has lost credibility to much of the world as the defender of liberty and freedom and our national identity is eroding. We can no longer deploy our armed forces for peace keeping measures with the good faith of the international community. We need to regain the respect and faith of the global community. This begins by withdrawing our troops from Iraq and helping the Iraqi people rebuild their country and society.

8. The majority of American citizens, Iraqi citizens and US military would like to see an immediate end to the war in Iraq.
If we are truly a democracy and we aim to create a democracy in Iraq our leaders will represent the will of the citizens and lead according to their wishes.

9. The military is broken.
We are abusing the small population of armed service members with multiple deployments while using inadequate vehicles and equipment. Less than one half of a percent of the American population is serving in the active armed forces, which is the least amount in the last century. Only 25% of the troops in Iraq are there for their first tour, while 50% are there on their second tour, and the remaining 25% are there three times or more. We continue to involuntarily extend soldiers with Stop-Loss, recall them repeatedly for additional service using the Individual Ready Reserve, and send soldiers with diagnosed medical problems into combat.

Who in the fuck is that lame that would post that and not even actually use the word cock.... gee, I wonder, what a puss!

>Don't talk down on them, they served you!

?Why we're against the war

?Q: Why are veterans, active duty, and National Guard men and women opposed to >the war in Iraq?

FYI THERE IS NO WAR IN IRAQ, THE WAR HAS BEEN OVER FOR A FEW YEARS, WHAT WE HAVE THERE IS AN OCCUPATION!

I have to hand it to you, you have surely done your homework. I cannot agree with you more. Our programs here at home are failing, we buy lead infested toys so corporate greed can flourish, when lead has been illegal here for years to use in paint. Why were there no quality control standards?

Why wait till its to late. This is just another example of the screwed up corporate run government system we have in place.

Veterans simply want a just cause, is this war just, well I think you answered that question perfectly above. "We the People", needs to be back where it belongs. We need leaders, not politicians.We simply have stood by to long to let everything our forefathers have worked for. We need to think about our children, and the killings in schools. We need to bring back the fear of the paddle, and put time out in the dumpster.Our education system dictates the future of our country, and as of right now, it is failing!

I hope more people read the comments and links above because they are true.

For which is better, to be born blind, or to have once seen the beauty and then go blind.

We can see, but yet many of us are blind to the truth, or maybe you think you are just one person, and what can one person do.