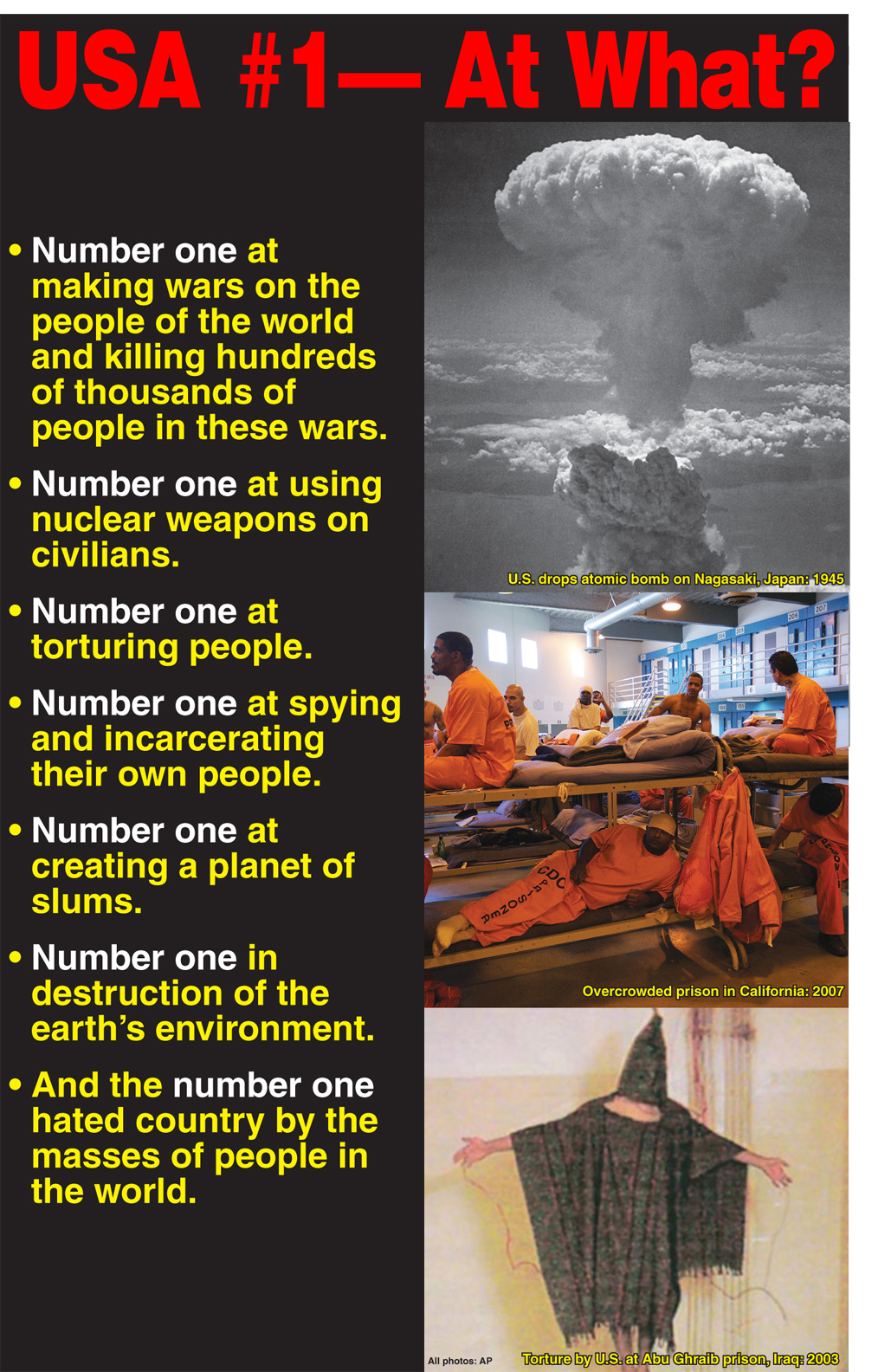 shaDEz ol buddy, time to stop bein spoon fed 1/2 truths and lies by your new commie buddies and start doin your own research before forwarding along such BS party line crap which only serves to make you look uninformed/misinformed.

The points in your post are all but one, completely incorrect. While the US is (to date) the only govt/country to have used nukes, the target was still a militarily designated one as it struck a blow against the Japanese military construction/support production zones in Hiroshima and Nagasaki. War is neither sanitary nor can it be a completely civilized action (though many whiny babies disagree), that's why it's known as war

this is some bullshit beast would pull outta his ass.

@MrKim, I accept your statement about the original post being based on half truths, but are you not worried about your country given that what has been claimed is in fact half true?

@fred smith, while I know America has a proud history of democracy, is it really no. 1 in free speech? There are other democratic countries in the world too!

Aw come on shaDEz, so now we're supposed to be impressed by half truths, or in your summation half rights

Dude, get with the program and state complete truths or forget about postin at all. Unless one states complete verifiable facts, EVERY further statement becomes suspect, lessening your words impact and leaving others with doubt about anything you say after that. \

It's kinda like givin a talk on gun safety and during the talk you manage to shoot yourself in the foot. How much impact would your words on gun safety hold, even if every one of them were completely true, if the audience watched you shoot yourself?

Real simply, either get on the verifiable train of thought or stay off the rails altogether

MrKim... Just curious as to what country you would rate as number one in each of these catagories and where do you think the US would rate?
brokntoad Report This Comment
Date: August 13, 2008 12:16AM

wow... I did a bit of research and was surprised that we would only get to stand at the top of the podium for being war monging, jail birds that most other people hate. We wouldnt even medal in any of the other events. DAM and I thought we were always #1.

PS. If marijuana was legal we would lose our jail bird gold medal.

Being no 1 on jailed citizens is not so bad. Did you consider that it might be because we have one of the largest populations in the world and the other countries who come close to us or pass us in population tend to kill their criminals instead of putting them in jail? Maybe we should just kill criminals right after they are convicted instead of giving them free room and board.
Mrkim Report This Comment
Date: August 13, 2008 05:14PM

I'm not really into speculation about such things BT, nor do I care to spend the time sortin it all out, 'sides, stats/data and the reporting methodology in the 1st place can be manipulated in any number of ways to arrive at whatever destination one choose to head for, so it all becomes suspect in the end.

I think the US keeps at least fairly accurate data on a lot of things as do many other countries while many others manipulate things to keep themselves lookin better than things really are, yakno

I do hafta agree that without the draconian war on drugs our prison populations would be much lower. And ... if we simply expelled the illegals within the prison system back to their countries of origin it would likely have the same effect while also savin good ol John Q a shitload of cash at the same time. Sounds like a win-win if there ever was one

Drug laws being what they are are is a discussion which has been going on for years but the fact that they are illegal and people still break the laws knowing they are illegal means they belong in jail. I would lkie pot to become legal but because it is illegal I will not use it and haven't in over 30 years. I still say if you do not break the laws you have nothing to fear from police.
Anonymous Report This Comment
Date: August 14, 2008 11:24PM

jgoins, I do not live in the USA so I have to go by what the media reports, but from my understanding there are a number of black people in the US who would disagree with that last sentence of yours - ie. they had not broken any laws yet end up in trouble with the police (either through the court system or at the end of a baton).
fossil_digger Report This Comment
Date: August 15, 2008 12:30AM

you're only innocent if you're rich. public appointed lawyers are a joke.
jgoins Report This Comment
Date: August 15, 2008 12:04PM

I have changed my mind, I don't like the pictures anymore.