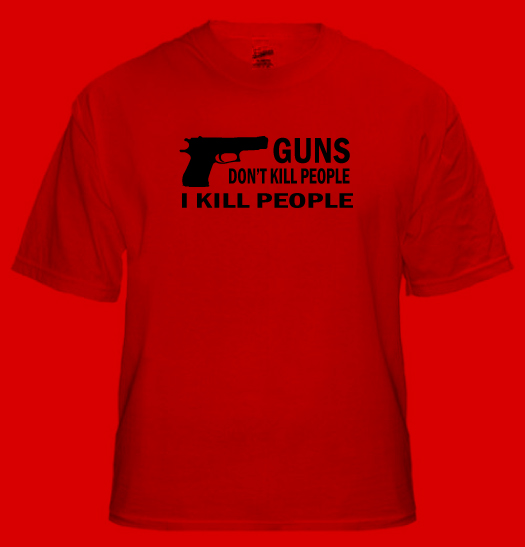 Its called taking responsibility for one's own actions.

^^^ maybe it's dead because somebody shot it...

And the National Rifle Association says that, "Guns don't kill people, people do,” but I think the gun helps, you know? I think it helps. I just think just standing there going, "Bang!" That's not going to kill too many people, is it? You'd have to be really dodgy on the heart to have that…
- Eddie Izzard

Guns might make it easier (to cope with) but in the end it's a humans decision to push a knife through someone jugular veins or smash their skull in or choke them or drown them or deprive them of nourishment or even tourture them to death. These are all things some people CHOOSE to do to others. Guns don't DO anything.

Hey, why don't we outlaw vehicles? So many people die in them and are cripled in them. People get killed by vehicles even when they aren't even in a vehicle. Vehicles cause so much death and distruction. I think we should get rid of them. Cars and trucks are bad. There really bad.... real bad.

if i didn't carry, i might not be here to tell you guys anything. saved my ass twice now.

^^^ you see !!! They should be illegal! Jesus fucking Christ!
ImNotLikeEverybodyElse Report This Comment
Date: February 06, 2013 12:05AM