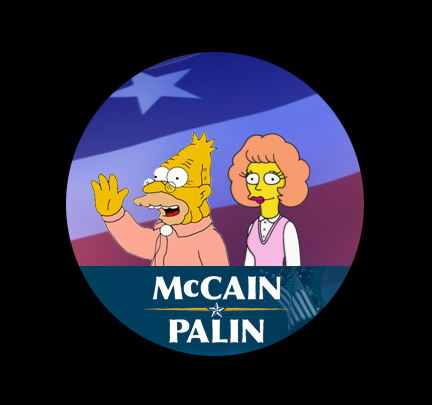 Anybody watched SNL last Sat. ?, the C-span skit was FUNNY!, I tried nbc dot com to watch the skit again but it's GONE! REMOVED! CENSORED!

McCain THE Keating Five Criminal..... fucks the people every chance he gets.
[www.youtube.com]
Monster1 Report This Comment
Date: October 07, 2008 08:06PM

Here is the SNL C-Span skit watch it fast cause they'll pull it out fast!

NBC's "Saturday Night Live" last evening amazingly blamed Democrats for the current financial crisis, and accurately informed viewers that the Bush administration warned about the looming calamity many years ago.

This came roughly 24 hours after actor Alec Baldwin made the same claim on HBO's "Real Time."

In addition, much like a report Matthew Sheffield and I did for the Capital Research Center last month, "SNL" exposed the money behind far-leftwing causes and entities in a stunningly accurate fashion, including chiding hyper-partisan billionaire George Soros as being the owner of the Democratic Party.

Here are some of the highlights:

After Nancy Pelosi (played by Kristen Wiig) blamed the Bush administration and Republicans for the current financial crisis, President Bush (played by Jason Sudeikis) interrupted: "Wait a minute. Wasn't it my administration that warned about the problem six years ago? And it was Democrats who refused to listen?" When Pelosi protested, Barney Frank (played by Fred Armisen) corrected her, "Actually, this time, this time he's sort of right."
Two "regular Americans" were introduced to tell their story of how they got caught up in the housing crisis, and now face eviction. They both admitted to fitting "all the requirements for a subprime mortgage": no credit history, no job, minor criminal record, dishonorable discharge from the army, drug problem, alcohol problem, gambling addiction, and a pregnant girlfriend(s).
Herbert and Marion Sandler (played by Darrell Hammond and Casey Wilson respectively), the former banking moguls now with clear financial ties to ultra-leftwing outlets such as the Center for American Progress and Media Matters for America, were exposed as major players in the subprime mortgage market before they sold their company, Golden West Financial, to Wachovia. Under their captioned names on screen, the words "People who should be shot" were displayed.
George Soros (played by Will Forte) told viewers that all of the $700 billion coming from the recently passed bailout bill is going to him. Under his captioned name on the screen were the words "Multi-billionaire Hedge Fund Manager, Owner, Democratic Party."
How delicious.

In the end, NBC should be applauded for having the nerve to present this information that is clearly being withheld from the public by traditional mainstream media outlets.

We can only hope that much as what happened a few months ago when "SNL" shamed the Obama-loving press into doing a better job of fairly covering the Democrat presidential nomination race, this skit will encourage some honest examination into what caused the current financial crisis, and who is funding far-leftwing politicians in our nation.

—Noel Sheppard is the Associate Editor of NewsBusters.