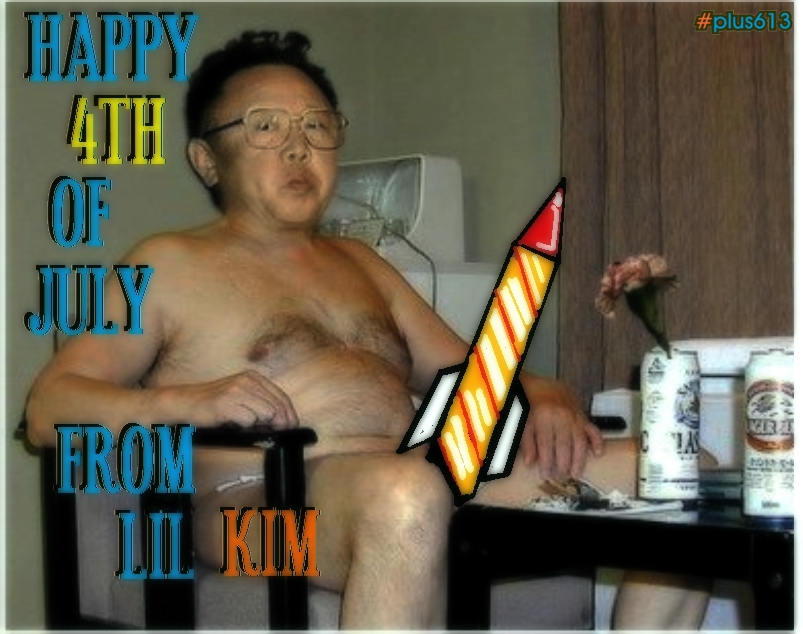 its after 3am us time and numbnuts kim has fired a fifth missile
Mrkim Report This Comment
Date: July 04, 2009 12:33PM

I'd say it's high time the international community stop playing into this fuckers plan. He makes threats, gets lots of coverage for his displays of "Look what we could think about doing with our toys", then steps away and waits for the $$ and other political and financial concessions to come rolling in to supposedly keep them in check, which BTW obviously isn't working.

His overtly obvious acts of political/military blackmail ought to be viewed for what they are, the attempts of a maniacal fool to ransom money from the international community to help support his failing national economy. Until his BS is ignored and correctly viewed for what it is, just like every other type of brattish behavior known to humanity, it will be continued. Trying to placate his actions with $$ and concessions is quite simply a form of "enabling" on an international level and only insures such acts will continue in the future. This behavior is easily anologized as the same thing as a spoiled brat throwing a temper tantrum to achieve placation by Mommy agreeing to their demands.

Does anyone with 1/2 a brain truly believe he intends to launch even a ballistic, much less a nuclear strike against the US? While I have no doubt he's a meglomaniac, such an action would be totally foolhardy, kill off any ties with most any country N. Korea finds currently supporting their actions and immediately embroil his country in a fight he could neither support financially, nor militarily.

One need look no further than to the aftermath of the 9-11 events and the impassioned sense of nationalism that followed those events to understand that any military attack on a US target would lead to a cry for blood on a national level likely unseen within our borders since the attacks that drew us into WWII.

It's high time the international community just seal N. Korea off from the rest of the civilized (<- and YES, I'm using this term VERY loosely) world until they agree to stop this BS and shit stirring that only continues to harm N. Korean economy, and just as surely its people, as a byproduct of the sanctions these actions lead to.

Thanks, digger; there's nothing like a little light reading on a Saturday morning. I'm going out to the shed now to ready my own missile defense system to attempt to intercept the bottle rockets the idiots on the next block will be shooting this way tonight.
jgoins Report This Comment
Date: July 05, 2009 11:00AM

"One need look no further than to the aftermath of the 9-11 events and the impassioned sense of nationalism that followed those events to understand that any military attack on a US target would lead to a cry for blood on a national level likely unseen within our borders since the attacks that drew us into WWII."
-----

Mr Kim, the people in this country might scream for blood after an attack but with the President we have now no action would ever be taken. All he would do is ask that talks be held. Odamna hasn't bot the balls to do what would need to be done. If he had been President during the attack on Pearl Harbor we would be speaking Japanese right now. This has nothing to do with him being an ace of spades, just the fact that he is a coward.