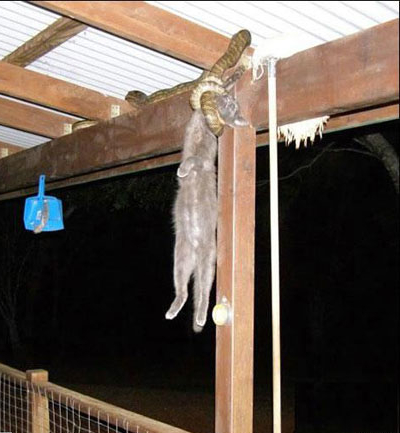 got it! damn that was a search and a half! I knew it too but turned up nothing.
Cat's a useless creatures but a good food source.
fossil_digger Report This Comment
Date: August 14, 2009 12:27PM

slim just bit me and said pass it on.

It's almost urban legend status up here that cats are the best halibut bait in the world. Everyone's heard it, but I've never heard anyone actually admit to having done it, or knowing someone who has.

I think I've mentioned this before in the "would you eat dog meat" thread...
... there was a guy who fed his pet python kittens because the pet store was out of mice. He was arrested and charged with some lame humanitarian offense. Anyway the courts ruling was that kittens were "companion animals" and you can't feed them to pythons (or use them for fish bait) but rats and mice are OK.

a guy i knew years ago head a 10-12 foot python in a 200 gallon aquarium (not big enough) he fed them guinea pigs, but got this "brainstorm" one time to try chickens ( he had some deal for 2 bucks/head, but they were live

). he went to hit the chicken on the side of the tank (his head killing it) and the chicken started flappin' and wigglin' and got loose, fell right in the tank, snake grabbed it and chicken went nuts feathers flyin', then the snake hit a vein? blood went everywhere.