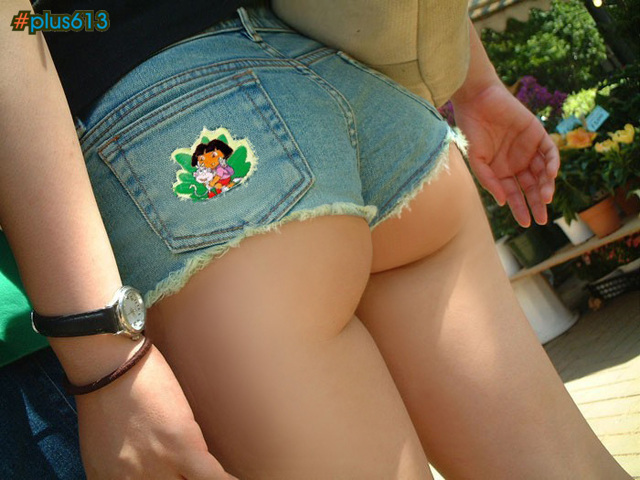 That is a very very young ass you sick fuck. They are gonna love your virgin butthole in prison. Have fun with that.
Mrkim Report This Comment
Date: November 25, 2009 03:37PM

And you arrived at that conclusion by what fact set or reasoning?

Ooops, silly me, you censorship prone ideagogues aren't bound by the constraints of provable, much less logical constructs .... carry on my wayward son

If the person carrying this ass around is under 18, then maybe her parents should be in prison for letting her dress like a whore in the first place.
anonymous Report This Comment
Date: November 26, 2009 02:00PM

Don't insult my intelligence with that tripe kim. My 9 year old daughter grew out of Dora the Explorer 3 years ago. My 4 & 5 year olds still loves the show. Doubt this girl is even in middle school yet. I'd put money on it.
Mrkim Report This Comment
Date: November 26, 2009 02:43PM

Insult your intelligence? Sounds like canting the ABCs could suffice for that chore.

Unless you can somehow prove out your rant, what, if any, is your point ... short of that one at the top of your noggin

I see, another one rides the (short) bus.

The deal here and actually anywhere is .... there is no crime if there is no evidence to substantiate that there's been one. Ergo, without some reasonable proof she's underage your assertions are foundless and to be honest,sound foolish. These same accusations do however state reams about things that very likely reside inside the accuser. Any doubts about that claim? Look it up, it's well documented in psychological journals.

Here's a good rule of thumb : Never accuse anyone of anything you can't prove. It just might save you a lot of potential embarrassment in the long run

i've got to go sacrifice a turkey now, i have a funny story to tell now, check with ya later.

nobody's being accused of anything in a court of law. the accusation is on an internet forum. no proof is needed. it's a clearly sexual image of someone who is either underage or a very young-looking adult. whether she is or not underage is immaterial in moral terms. tell yourself whatever you like though.
pulse Report This Comment
Date: November 26, 2009 09:09PM

The Dora thing is hardly proof, the other day I saw a woman on the train with a dora the explorer backpack.. she'd have been 25 years old if she was a day.
Harvey Wallbanger Report This Comment
Date: November 27, 2009 12:35AM

Wow is that a fine ass or what!! That is perfect! Who has a camera when they see that stuff? Hmmm hope it wasn't set up... no wait, i dont care if it was!

nobody's being accused of anything in a court of law. the accusation is on an internet forum. no proof is needed.

I could "claim" to be Howard Hughs long lost heir and deserving of a large share of the Hughs fortune on this same internet forum but without offering something to prove out that claim it holds no water and like your own claim, it pretty much means nothing.

it's a clearly sexual image of someone who is either underage or a very young-looking adult. whether she is or not underage is immaterial in moral terms.

Ah yes, that whole I'm moral but you're not "'cause I say so" thing. Now we seem to be getting to the meat of the matter!

So it seems your morality issue with this pic seems to revolve around the idea that because she looks young the image is then immoral. Let me clue you in on something that's been going on in the art world for centuries. Young models are now and always have been more highly sought after than older ones. The simple why has no relation to morality at all, it's just that younger models are more attractive and hence make more appealing subjects.

If that's too much for you to handle I would have to suggest you get yourself some oversized blinders and wear 'em daily so you don't wind up having to berate yourself on a daily basis for what you might see without them to protect you.

You moralists sure are a funny bunch. I don't guess I'll ever understand others thinkin they know best for anyone but themselves, much less expecting they have some real right to make such judgements in relation to others

If a conservative sees a foreign threat, he thinks about how to defeat his enemy.
A liberal wonders how to surrender gracefully and still look good.

If a conservative is down-and-out, he thinks about how to better his situation.
A liberal wonders who is going to take care of him.

If a conservative doesn’t like a talk show host, he switches channels.
Liberals demand that those they don’t like be shut down.

If a conservative is a non-believer, he doesn’t go to church.
A liberal non-believer wants any mention of God and religion silenced. (Unless it’s a foreign religion, of course!).

If a conservative decides he needs health care, he goes about shopping for it, or may choose a job that provides it.
A liberal demands that the rest of us pay for his.

If a conservative slips and falls in a store, he gets up, laughs and is embarrassed.
If a liberal slips and falls, he grabs his neck, moans like he's in labor and then sues.

If a conservative reads this, he'll forward it so his friends can have a good laugh.
A liberal will delete it because he's "offended.”

Glad you liked it. I did.

If a conservative reads this, he'll forward it so his friends can have a good laugh.
A liberal will delete it because he's "offended.”


I'll do neither...what does that mean?

A liberal will delete it because he's "offended.”

That's because if liberals had their way it would be legal to walk the streets naked, including children, just so they could have a look-see. I'm not even going to address kim's comments. He's so fuckin retarded with tunnel vision it's not even funny.

Anyone who can't even be bothered to think up a fake user name isn't going to "waste" enough brain-power to come up with a post that's worth reading.
anonymous Report This Comment
Date: November 28, 2009 01:45PM

What about the guy that uploaded the pic apeshit? he posted anonymously because. he knows she's 12 or under. have to have an IQ of 40 to not see she's that young.
Onyma Report This Comment
Date: November 28, 2009 04:05PM

Just going to add a bit to this thread...

A. if you do a TinEye related image search on the web you'll discover quite quickly that this is a Photoshop... one version of the original image here:

B. Someone photoshopped it to look younger and fuller than it was originally.

C. Probably the same someone added the cartoon logo to imply a young age.

D. The final image made it's way around the internet and a copy found it's way here.

So it would appear that: No parent let their child dress like that (at least not for this photo)... the odds of it actually being a child are slimmer when you look at the original... the photo does appear to have been doctored with the intent to imply someone underaged... and the sicko in this entire process is the one who doctored the photo in the first place.

That is all. Carry on.

Yep, this is usually what happens when you start feedin the anonychimps. Soon as their bellies get full they start slingin turds all around the place.

If your IQ is above 40 I'd be truly amazed. My own resides in a number just below a factor of 4 and it tells me while the pic is surely displayin a nicely rounded and shapely bottom it also tels me there isn't enough data to adequately determine the absolute age of the ass in question. I will say this though, if you think only a 12 yr old can posess an ass that fine I'd hate to see the slab of feemale you settled for. Mskim #2 had an ass that nice and she was 39 when I met her!

Talk about tunnel vision? If I were handin out prizes to mentally challenged, self righteous, self obsessed blow hards ... you'd be 1st in the receiving line.

i must admit to google'n "Dora the explorer hotpants". you bastards are responsible for one of the freakiest results in my net lifetime.

Fess up Fossil, you know you bookmarked it

i decided soon after executing the search to escape out asap in fear of the "cp" pigs.