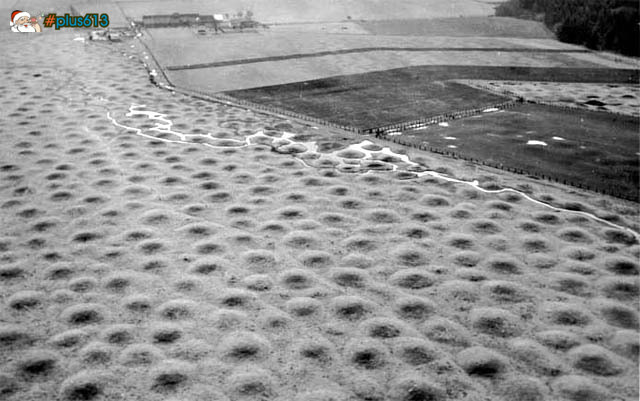 What’s an extra added bonus about these cryptic ‘whatevertheyares’ is that they aren’t as miniscule as a protein sequence, aren’t as subatomic as the elusive God particle, and certainly not as shadowy as dark matter. Found in such exotic locales as Kenya, Mexico, Canada, Australia, China and in similarly off-the-beaten path locations as California, Arkansas, Texas, Louisiana, and especially Washington state, the mounds first appear to be just that: mounds of earth.
The first thing that’s odd about the mounds is the similarity, regardless of location. With few differences, the mounds in Kenya are like the mounds in Mexico which are like the mounds in Canada which are like the … well, you get the point. All the mounds are heaps of soil from three to six feet tall, often laid out in what appear to be evenly spaced rows. Not quite geometric but almost. What’s especially disturbing is that geologists, anthropologists, professors, and doctors of all kinds – plus a few well-intentioned self-appointed "experts" – can’t figure out what they are, where they came from, or what caused them.
Not man-made, hardly nature-made and possibly not subconscious-made
One of the leading theories is that they are man-made, probably by indigenous people. Sounds reasonable, no? Folks in loincloths hauling dirt in woven baskets, meticulously making mound after mound after … but wait a minute. For one thing it would have been a huge amount of work, especially for a culture that was living hand-to-mouth. Then there’s the fact that, as far as can be determined, there’s nothing in the mounds themselves. Sure they aren’t exactly the same as the nearby ground, but they certainly don’t contain grain, pot shards, relics, mummies, arrowheads, or anything that really speaks of civilization. They are just dirt. And if they are man-made, how did the people in Kenya, Mexico, Canada, Australia, China, California, Arkansas, Texas, Louisiana, and especially Washington state all coordinate their efforts so closely as to produce virtually identical mounds? That’s either one huge tribe or a lot of little ones who somehow could send smoke signals thousands of miles. Not very likely.

Next on the list of explanations is that somehow the mounds were created either by wind and rain or by geologic ups and downs – that there’s some kind of bizarre earthy effect that has caused them to pop up. Again, it sounds reasonable, right? After all, there are all kinds of weird natural things out there: rogue waves, singing sand, exploding lakes, rains of fish and frogs – so why shouldn’t mother nature create field after field of neat little mounds?
The "natural" theory of nature being responsible for the Majorly Mysterious Mima Mounds starts to crumble upon further investigation. Sure there’s plenty of things we don’t yet understand about how our native world behaves scientists do know enough to be able to say what it can’t do – and it’s looking pretty certain it can’t be as precise, orderly, or meticulous as the mounds.
But still more theories persist. For many who believe in ley lines, that crop circles are some form of manifestation of our collective unconscious, in ghosts being energy impressions left in stone and brick, the mounds are the same, or at least similar: the result of an interaction between forces we as yet do not understand, or never will, and our spaceship earth.
Then who's responsible?... wait for it...
Others, those who prefer their granola slightly less crunchy or wear their tinfoil hats a little less tightly, have suggested what I – in my own ill-educated opinion – consider to be perhaps the best theory to date. Some, naturally, have dismissed this concept out-of-hand, suggesting that the whole idea is too ludicrous even to be the subject of a dinner party, let alone deserving the attention and respect of serious research.
But I think this attitude shows not only lack of respect but a lack of imagination. I simply ask that this theory be considered in all fairness and not dismissed without the same serious consideration these now well-respected theories have received.

After all, giant gophers could very well be responsible for the Mysterious Mima Mounds.