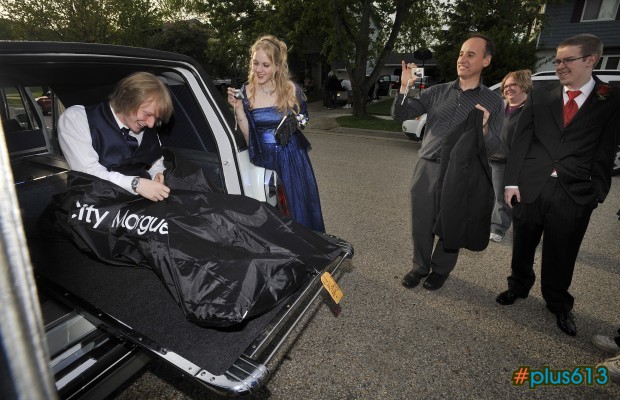 STURTEVANT — Sara Jozefowski found herself in the back of a hearse Saturday night.
The 18-year-old Park High School student was not headed to a funeral though. She was going to prom.

Along with five friends from Park, Jozefowski rode in a restored, antique hearse on the way to the school’s prom. They also rode in the hearse in the parade procession that led students at eight Racine-area high schools from their individual school proms Saturday evening to the Racine Downtown Rotary Club’s annual all-school Post Prom celebration Saturday night.

The parade to Post Prom has become notorious for the crazy and out of the ordinary rides students choose, attempting to outdo each other. Past promgoers have taken fire trucks, buses, classic cars and even an elephant, though animals are now banned.

“I think everyone just wants to ride in something really cool to have the best car and have something different,” Jozefowski said, which is why she and her friends went in the hearse. “We just thought it was really different and would be fun.”

Jozefowski got the idea to arrive in a hearse from her mom, who works with a woman whose boyfriend, Chris Friend, just finished fixing up the antique hearse for car shows. When Friend, 34, of Racine, heard about the idea for him to drive the students to prom and Post Prom in his hearse, he was thrilled.

“I don’t think it’s been done before,” said Friend, who went to high school in Racine and knows about the desire for unique prom transportation.

And the hearse certainly fit the unique transportation category. Complete with 30-inch tire rims and skull detailing on the rearview mirrors, the 1984 Cadillac hearse and its pearl blue paint job gleamed when Friend picked the students up Saturday from Jozefowski’s house in the 8500 block of Westbrook Drive.

“I didn’t expect it to have the rims and little skeletons but that’s pretty cool,” said Donovan Senzig, an 18-year-old Park senior who rode to prom in the hearse.

After posing for group pictures in front of the hearse, Senzig, Jozefowski and the other students climbed in the hearse’s back and front seat one by one, the girls carefully maneuvering to avoid snagging dresses or wrecking high heels.

While riding in the back of a hearse may sound morbid to some, Jozefowski said it doesn’t bother her or her friends.

“There’s no bodies in there now and he keeps it clean,” Jozefowski said of the hearse, which is not used to transport the deceased anymore. “I don’t think it’s really too scary.”