Linda Carter, the original and best. 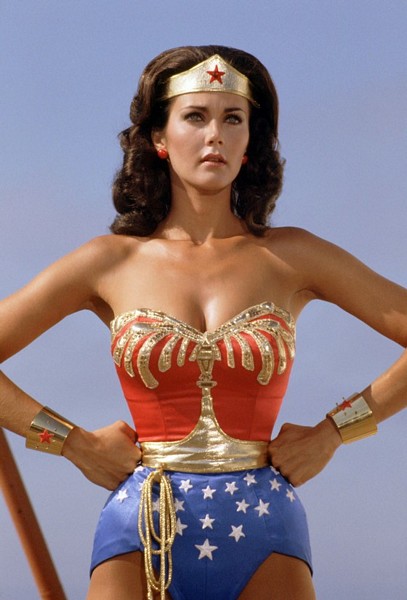 It's like Christopher Reeve and Superman. Some actors are just iconic in the role and it'll be at least a full generation before someone else takes over that position to the same degree.
BlahX3 Report This Comment
Date: December 16, 2011 04:53AM

Nope, she was the original TV one. They could have done without the damn corset under the costume though. She would have looked fine without it. Probably better, at least in my opinion.

There was an episode of Bones where Temperance wore a Wonder Woman costume for Halloween that gave Linda Carter a run for the money, I tell ya!

Wonder Woman (1974)
Cathy Lee Crosby in the first Wonder Woman film.Wonder Woman's first appearance in live-action television was a television movie made in 1974 for ABC. Written by John D. F. Black, the TV movie resembles the Wonder Woman of the "I Ching" period. Wonder Woman (Cathy Lee Crosby) did not wear the comic book costume, demonstrated no superhuman abilities and her "secret identity" of Diana Prince was not all that secret. The film follows Wonder Woman, assistant to government agent Steve Trevor (Kaz Garas) as she pursues a villain named Abner Smith (Ricardo Montalban) who has stolen a set of code books containing classified information about U.S. government field agents.[4]

The pilot aired originally on March 12, 1974[5] and was repeated on August 21 of that year.[6] Ratings were described as "respectable but not exactly wondrous."[7] ABC did not pick up the pilot, although Crosby would later claim she was offered the series that was eventually given to Lynda Carter.[8] An ABC spokesperson would later acknowledge that the decision to update the character was a mistake[7] and the pilot itself has been labeled one of the "hundred dumbest events in television."[4]

You're right, my mistake. I got the dates screwed up I guess and thought that came later.