Bear Lady of Yachats, OR 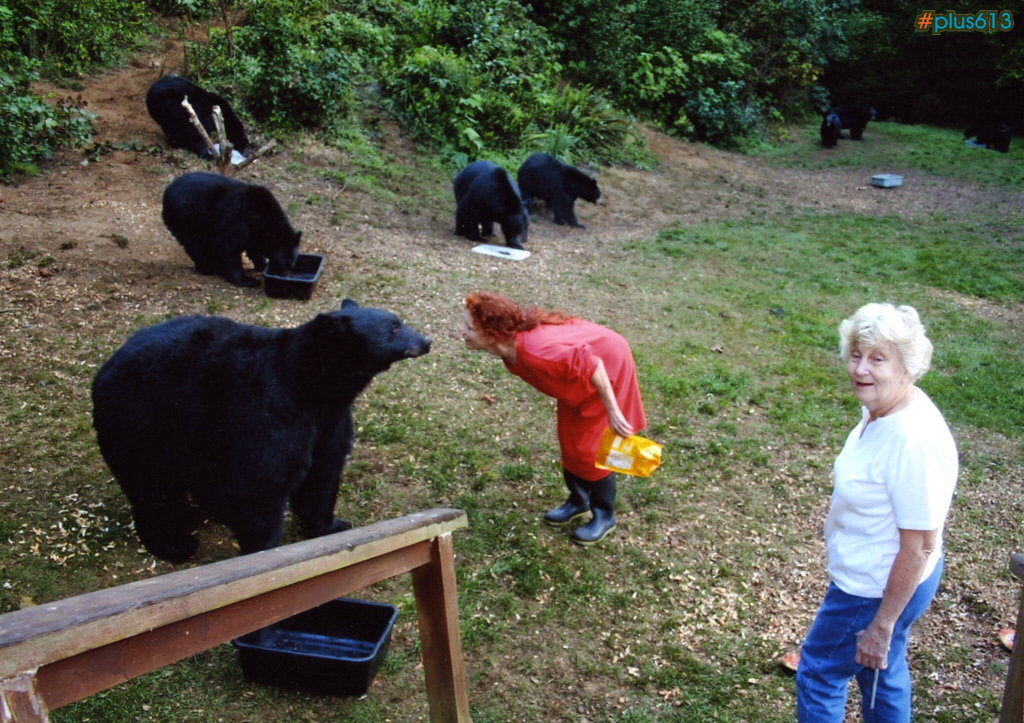 No, not bear chow. Apparently she learned better which is more than can be said of a lot of people.

I don't know who the white haired dork is but she's not too smart either.

Unfortunately those bears will never revert to normal and will probably never regain their fear of humans. Sooner or later they will have to be put down.
BlahX3 Report This Comment
Date: May 13, 2012 02:04PM

I agree, the animals won't forget where the food came from nor will they ever be as afraid of people now. I think the woman should have been more severely punished by the law for what she did. All she got was a $5,000 fine and had to stay away from her home for 3 years. She is gone for good out of state anyway. Good riddance. We got enough other craziness in Oregon and don't need that shit.
jgoins Report This Comment
Date: May 14, 2012 10:05AM

would have been better if she had been mauled, she would have learned a lesson adn the bears would have been hunted down and destroyed before anyone else would be in danger. Now the bears are just a loaded weapon waiting to go off.
woberto Report This Comment
Date: May 14, 2012 10:31AM

Animals are food, I dont understand the obsession of making pets. When that woman had her face ripped off my her chimpanzee I nearly laughed my own face off.
Let's hope this bear woman hasn't caused any future attacks.
quasi Report This Comment
Date: May 14, 2012 01:06PM

If I remember correctly I think the woman who had her face ripped off (and hands chewed off) was actually just a friend of the woman who owned and was killed by the chimp. That's not so funny but people are very foolish to think they can make pets out of wild animals and many tend to get pretty ridiculous in the way they treat their domesticated pets as well.
BlahX3 Report This Comment
Date: May 14, 2012 01:13PM

Pets are wonderful for kids and other people with the maturity and IQ of a 9 year old.
Animals that have been broken are the only pets you can trust. It's cruel but the alternative is, don't keep a pet.
It is actually sad that people get killed by animals they keep or train. Somebody's mother, child whatever.
But we just don't learn from that.
All these so called animal lovers, like Australia's best known idiot Steve Irwin, are/were really animal abusers.
I won't say they deserve it but it just a matter of time for such people before they get it.

I like animals just fine as long as they belong to someone else or they're on my plate. I find it very funny for an Aussie to dis Irwin like that but I think you're right. I could only stand to watch so much of that guy too. Annoying as hell.

I don't have any problem with dogs of others as long as the owners are taking proper care of them including training and they are clean and nice. There are definitely those who go too far over their pets but it's their lives so what do I care. Cats are cute and fun and cuddly until they scratch the fuck outa you, too destructive and unless they are good mousers pretty much a waste of pet food. I don't hate cats, I've had my share. No more please, and the only dog I'll ever possibly have again better taste like chicken.

I am a dog person and treat my 3 little dogs as members of my family, they are as close as my own children. I have no respect for people who keep dogs only in the yard and never pay attention to them except to feed and water them, unfortunately my son is one of those. There is nothing wrong with having domesticated pets as long as they are well taken care of and provided with love.
woberto Report This Comment
Date: May 15, 2012 12:43PM

Meh. Dogs are stupid animals that work 100% for food reward.
Any concept of loyalty or the like is just a delusion of the people who own them.
Stop feeding it and it'll find someone else who will.
If that fails they are more than capable of feeding themselves.

The dogs like you describe are the dogs who are only kept in pens or chained to a tree and never get any attention except at feeding time. House dogs are generally well loved and will return that affection regardless of feeding. Our dogs have food and water left out for them 24/7 and they are always happy to see us when we leave and return home so food is not the issue. They sit beside us on the couch, they play with us and they sleep with us on the bed. They know they are loved and they return the love 10 fold.
BlahX3 Report This Comment
Date: May 15, 2012 04:23PM

If I was ever to get another dog I'd want a small one. Eventually my wife and daughter will overrule me about a dog but when that time comes I will insist on a small one.
jgoins Report This Comment
Date: May 16, 2012 10:29AM

Yes small ones are much easier to include in the family as long as you don't have arbitrary rules about dogs on the furniture.
woberto Report This Comment
Date: May 16, 2012 11:14AM

Cats are the only pet I care to own, and really, owning a cat is a misnomer altogether. Cats do their own thing which is why I like 'em. They come n go as they please, do what they please and that suits me just fine, we understand each other well and coexist similarly.

I'll never again have another dog, they bore the shit outta me for anything other than functional protectors of other animals, human and otherwise. There's no one here to out vote me on this issue and that's a definite bonus. Can't stand the little yappin slobberin fuckers most people keep as pets.

There's 2 Great Pyrenees here at the farm to keep coyotes and other predators at bay, which they do well. They're friendly and I like 'em fine, but they're really just another farm animal and work for their daily bread.

When my cat Bob is gone I might get another one, but he'd be a hard act to follow so I kinda doubt it

Kim, the very reason you like cats is the reason I don't like cats. I have had cats and as long as they are kittens they are fine but when the are grown they become boring. I takes all kinds to make a wolrd and each to their own but I am definitely a dog person.
Mrkim Report This Comment
Date: May 17, 2012 11:26AM

Like an idea a friend of mine posed to me years ago: Dog people are into control, Cat people are not similarly driven, otherwise they wouldn like cats.

When I let Bob in in the mornin, he's right there at the door when I open it, comes in, rubs up against my leg then heads to his food n water. After he's had his fill he comes n jumps up in my lap and I pet him for a few minutes, then he jumps down and is on his way again.

He keeps the rat, mice and snake population at bay, for which he's fed and housed when the weather's bad, works well for both of us.

He's not there all up under my feet every time I take a step, never has his nose in my crotch or ass, is appreciative without bein needy, never slobbers on me, never stinks and dudn yap like a miniature hyena every time someone comes to the door.

I'm with ya, Kim. Dogs are fine as long as they belong to someone else. They're noisy, smelly, and too labor intensive. I've had numerous cats over the years and only had one that was unfriendly but they have all been self sufficient which is a plus for anumals and people. Dogs are a pain in the ass to maintain.
pro_junior Report This Comment
Date: May 18, 2012 05:25AM

I hate it when I step in dogshit or it gets stuck to the lawnmower tires in my own yard because someone's dog has been roaming the neighborhood. At least the cats that wander around bury their shit.
woberto Report This Comment
Date: May 18, 2012 10:02AM

When the aliens finally arrive they're gonna see morons picking up their dogs crap and assume the dogs rule the world and we are just slaves.
jgoins Report This Comment
Date: May 18, 2012 10:56AM

Well if someone breaks in a cat will just sit there and watch him steal everything, a dog at least will bark. When someone cases homes for a break in they tend to go to the next house if they hear a dog, no so if they see a cat. Dogs should always live in a fenced yard and if the owner is properly trained they can control the dogs barking. I like my dogs letting me know when someone approaches the house.
fossil_digger Report This Comment
Date: May 18, 2012 01:22PM

My mom used to have a toy poodle with a bad disposition that would start yapping when the telephone rang. I hated that dog.
jgoins Report This Comment
Date: May 19, 2012 10:49AM

The dog was just letting her know the phone was ringing in case her hearing gets worse.
quasi Report This Comment
Date: May 19, 2012 12:48PM

My dad was the one with the hearing problem and I don't think he liked that stupid mutt any more than I did. Little bastard outlived my dad and when the thing finally died of old age I didn't shed a tear as I buried it in mom's backyard.
BlahX3 Report This Comment
Date: May 19, 2012 05:26PM

I guess the meat was too tough by then huh?