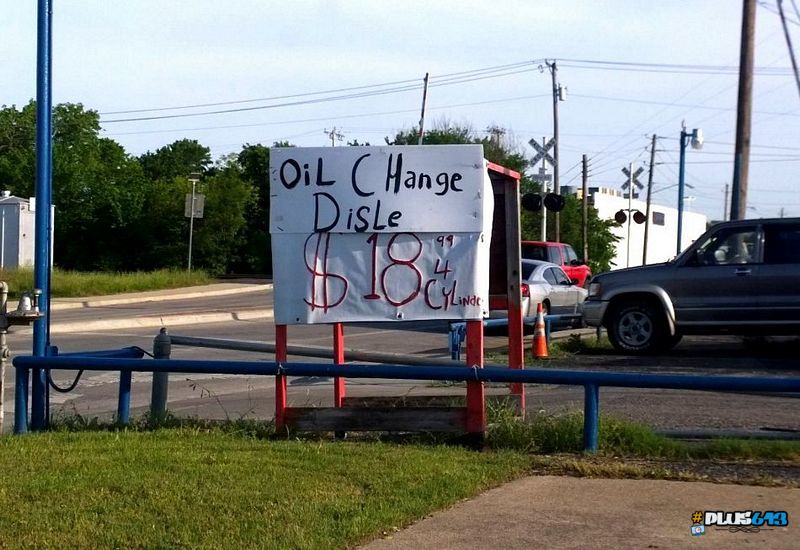 Why would an oil change be a different price for different number of cylinders?
pro_junior Report This Comment
Date: November 02, 2016 03:07PM

About time they invented an engine that doesn't need oil or gasoline.
Those stupid hybrid electric things or straight electric motors don't cut it either.
It's got to be better than those. It has to come from another form of physics.

^^^Hey dude^^^ keep us all informed when you figure out how to evade the sources of friction in mobile powerplant designs. I for one, won't be holding my breath.

Even "IF" a powerplant design were brought to fruition that had no moving parts (pretty unimaginable) there's still the need to transmit the output to something that will propel our "transportation device". Again, only "IF" in doing so you can eliminate all sources of friction can you similarly eliminate the need for lubrication.

Let's take a quantum leap and say a type of transportation is invented that somehow harvests antigravitation principles so we now have a device that floats above the ground. Unless you're satisfied with having a levitation device that essentially would go nowhere, you still have to exert some source of force on it to propel it in the direction you want to move towards. Again, unless in doing so you can also eliminate all sources of friction ... you'll still need lubrication.

BTW, I ain't even gonna drag my wrenches outta the ol toolbox for el-cheapo priced oil changes. Fuck that, it's why we have all those wanna be mechs workin for just above minimum wage at the oil change joints

A few years ago I was listening to a well known scientist / lecturer explain how
placing three or four astronauts on top of a huge cylinder full of explosive materials
and firing them out into space is "stupid" and "lacks vision". And I agree.

We need the to consult the dudes who built the pyramids and Easter Island statues etc
cause they seemed to get around the "friction thing" and I believe used some form of weightlessness
techniques - but I'm also guessing if it were that successful, they probably would still be using them today.
For me. there's your real missing link. Somebody or something created a block to stop those methods
from being passed on through the generations and they have been completely lost.

They weren't just relying on tools on planet earth, there was something else they were connecting with
outside of earths atmosphere. But hey, just my own "shot in the dark" :-)

There are some strange anomalies that have made me wonder if this is really mankinds 1st and only go around on this spinning blue orb.

However, there are a myriad of awesome improvements, redesigns and offshoots of the current internal combustion engine, without even mentioning many other total departures from that realm that seem to hold great promise as well as powerplants of the future.

In my summation computer control of todays engines has done more to open up huge advances in efficiency and performance than any other single factor. Similarly, computer modeling allows for decreased R&D time and costs in development of new technologies too

On the other side of the coin though, I still find satisfaction
when servicing my own vehicle (Isuzu pick up truck).
It helps take my mind off other things and you save a packet
if you know what you're doing.

So if they ever do create the wheel-less "Luke Skywalker sports coupe"
I'll probably pass on it anyway. Just good to have a blurt now and then :-)

Nissan made a ceramic straight 6. Zero friction.
Didn't combust though, it was a demo that was driven by an electric motor to show it could be done.
And there was an urban legend that Nulon took a Crummydore with a Nissan 3.0 straight 6 and did a special Nulon teflon treatment, then drained ALL the oil and drove it 1,000Km without ceasing.

I know exactly what you mean in finding solace in doing your own repair/maintenance work Billy. Having had a car in someone elses shop only once since 1975 has saved me untold dolleros and ... I know the quality of the work done as well as the parts used. Sadly this is a trend lost on many males in modern society and even many mechs have become little more than parts changers. Reminds me of CNC mill/lathe operators who wanna be called machinists but couldn't set up a job on a manual machine to save their life

'Berto, yeah ceramics have been used with mixed results in many tests and experimental engines but have seemingly found little use in mass production, mainly due to cost of both involved manufacturing and finish machining of ceramic components. Ceramic coatings of various components however is a common part of many race teams builds and have been quietly embraced for a long time now.

I've always been suspect of anyone using teflon additives in oils used inside an engine, while in trannies and differentials it works great. The problem in an engine is the relatively low heat threshold of teflon. Even DuPont (original developers of teflon) advises against it's use as an additive for engine oils as in the upper cylinder areas it tends to get burned off and then lead to increased carbon particulate accumulations in the oil. However, if someone's figured out how to morph teflon into a more suitable heat bearing component then it would indeed be a great step forward

Didn't they find some form of ceramic power plant at the Roswell crash site?
hmmmmm.....