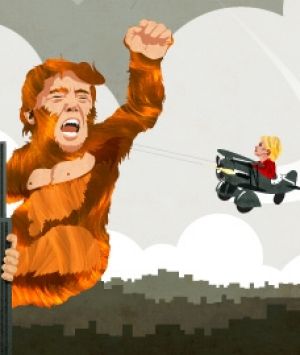 Hitlary Clinton is the monster.
Richard Head Report This Comment
Date: November 06, 2016 08:41AM

Not long now till we can finally put Trump to bed.
Polls say it's going to be tight. It's not. The democratic vote will smash this cunt
and knock him out of the political ring for good.
He should never have stepped into it in the first place.

If Hildebeast wins it will be the impetus for the secession of Texas from the union. We're already waaaay tired of puttin up with the shit the fed govt keeps crammin down our throats

Liberalism is a fanatical religion.
So anyone who would vote for Hillary is a fanatical nutcase.
John Winston Howard Report This Comment
Date: November 07, 2016 12:43AM

Some time ago I posted a little story about an eccentric billionaire called Clive Palmer
who attempted the exact same thing as Trump, here in Australia.
Only difference was that Palmer created his own independent party
but he won enough seats in the Senate to give him control of certain parts of our democratic process..

However, only after 18 months in power, he was forced
to leave parliament because it was revealed he was using his political might to further build
his mining businesses here and offshore and other money making projects. Just like Trump plans.

The guy lost millions as a result and put thousands of people out of work
because he folded those businesses to recoup the cash to pay his debts - and massive fines.

He should of went to jail but didn't.
If you dig deep enough, you will discover that both Trump and Hilary
would warrant a healthy stay in the slot due to their dodgy business dealings.

So choose your poison people - A wealthy eccentric business man with no political nous, hovering his finger
over a big red button OR a powerful female politician who would probably make a great actor in "Dallas" as JR's wife.

All politicians are crooked in one way or another all over the world but looking from an outside perspective,
you're better off with Hilary because she knows how to play the political game as she has done it before.
She knows how to manage other hostile countries and keep the doors of trade open.
If you close those doors, like Trump proposes, your unemployment will go through the roof and could take decades to recover.
It's not a perfect system but it's better than taking a gamble on Trump only to look back later and say "oops".

And with all the illegal Mexicans currently living in the US, most of them work for cash, meaning they still play some part in
keeping your economy moving. They still pay tax indirectly each time they go to the grocery store or fill up their tank.
The drug business not only comes from Mexico, remember that too. And not all illegals do illegal shit either.
Building a wall to keep them out only means they will find better methods to tunnel under it and fly over it.
You're much better embracing them rather fighting to keep them out. They can make you money!

Good luck and God Bless Us All - not just America.

Hillary Clinton is absolutely corrupt, with no allegiance to the United States.
She and her husband have left a trail of bodies, that would make the Kremlin shudder.
The economy is actually worse than what Greece had.
The present administration is publishing false employment figures and the only reason that the economy looks like it has recovered,is because the government is printing money to buy stocks to keep the stock market going.

The present political establishment needs to be gone.

Shhh ... don't tell JWH, he already knows everything about our society, economy, political candidates and even every facet of how illegal immigration effects them all

Yes Robert, it's too late to bring Bernie Sanders back into the presidential race
cause he was a way better choice than the current two put together.

Not everyone has to be an American to see what's presently wrong with America.
Unfortunately now, for us, America is the big ocean going cruise liner and Aust, NZ, Pacific Islands, UK and parts of the UN
are it's life rafts which are tied to it's side. (thru trade agreements)

I will be forever grateful for America's HUGE and relentless contribution to help save Australians from annihilation
in the second world war. We would of suffered a worse fate if not for the US troops in the Pacific.

However, it's not like that anymore. Times have changed, leaders visions have changed.
Greed has always been there but is more prominent than ever before in the US.
There is more economy generated now, by the current US military rather than by private enterprise.
That's real scary.

Do you remember this song?

And so once again
My dear Johnny my dear friend
And so once again you are fightin' us all
And when I ask you why
You raise your sticks and cry, and I fall
Oh, my friend
How did you come
To trade the fiddle for the drum

You say I have turned
Like the enemies you've earned
But I can remember
All the good things you are
And so I ask you please
Can I help you find the peace and the star
Oh, my friend
What time is this
To trade the handshake for the fist

You say we have turned
Like the enemies you've earned
But we can remember
All the good things you are
And so we ask you please
Can we help you find the peace and the star
Oh my friend
We have all come
To fear the beating of your drum........ (Fiddle and the Drum) Joni Mitchell 1969

I predict that if Hillary wins the election our country's economy will be destroyed within the first four years. Then what happens to the rest of the world? I also predict we will have completely open borders which will destroy our employment and our right to own guns will be gone and so will the guns then there will be no way to to take back our country from a corrupt government.

If Trump wins and the race is not rigged in HRC's favor then we will see probably no major change in the first four years because and huge ship traveling at full speed in on direction is slow to change direction and turn around. At worse he could be blocked on most things he does by the congress and senate which means everything will slow down. As far as the nuclear football is concerned he is not insane enough to use nukes. There is not a big red button on his desk that says push me for nukes, a nuclear command has to go through someone else who will question his decision to verify that is what he really wants to do. He will also have tons of advisers around him at all times letting him know what could happen in all his decisions. So stop worrying about Trump, nothing disasterous will happen right away if he is elected.

JWH, some insightful comments above indeed but before I go there let me first give great thanks for the bit of Joni (which admittedly, though a HUUUGE fan of hers, I'd never heard), as in takin a peek at her acapella version you linked to on youtube I was glancing down the side bar and found a Much Music show from 94 of hers that I thoroughly enjoyed as I slurped down my mornin joe. Amazing how sometimes "one thing, yeah one thing, leads to another". Here's a link in return to share to that bit of wonderfulness [www.youtube.com]

As an American I have always taken great pride in what our country contributed to the efforts in WWII and have often wondered if we had stayed on the sidelines of that fray what the world we know today would be like? Unfortunately that was also the last military venture our country ever undertook that was done so within the legal confines as defined under our Constitution, as well as the last time such an action lead to anything resembling victory once the dust settled.

My thoughts are that after WWII, we as a nation grew prosperous and then complacent with our success and we somehow lost our way for the most part since then. Eisenhowers exit speech when he left office was very portentous and should have been taken more seriously as it seems to have rung all too true in outlining the perils of the rise of the military-industrial complex.

I see Americas people and our government as almost in a constant state of diametrical opposition. As a nation of peoples we are open, caring, giving, and laissez faire, while the actions of our government itself are intensely secretive, divisive and meddlesome, both nationally and internationally.

Many of us, if not most, would prefer our government NOT be continually involved in all the conflicts around the world that ongoingly drain us of our blood and treasure. We view the international meddlings of our government as intrusive to the concept of world peace and harmony and the industrial abuses of others about the same. Basically what was once a democratic republic has slowly been turned into an military-industrial oligarchy.

The example you gave of ya'lls "outsider-turned-politician" and the inherent wrong doings and failure of that experiment is interesting but in the grand scope of things only shows one possibility of what could have occurred, not the only possible outcome.

To many of us Clinton embodies what is so absolutely wrong with our political system, and as such something we want to reject and move away from, not towards. She is the political devil we know, secretive, power hungry, conniving and willing to subvert our system of laws and governance in any way necessary to achieve her goals. I for one can never stand in support of that.

Trump on the other hand claims to want to usher in a different era of governance where it's returned to the idea where the people once more are more in control of our government, instead of the other way around. If he makes it tmarra, will that happen? That's indeed the $64,000 question, but after the last 50 yrs of governmental misdirection at least it sounds more promising than the bullshit Clinton wants

We all know what reparations are but I find this WW2 tid-bit interesting.
"The only Allied country who won but paid compensation was the USA, to Japan. In 1988, under the Civil Liberties Act, U.S. President, Ronald Reagan, apologized to the Japanese-Americans interned in camps during World War II and agreed to pay $20,000 to each surviving former detainee."