The One Thing Trump Didn't Lie About 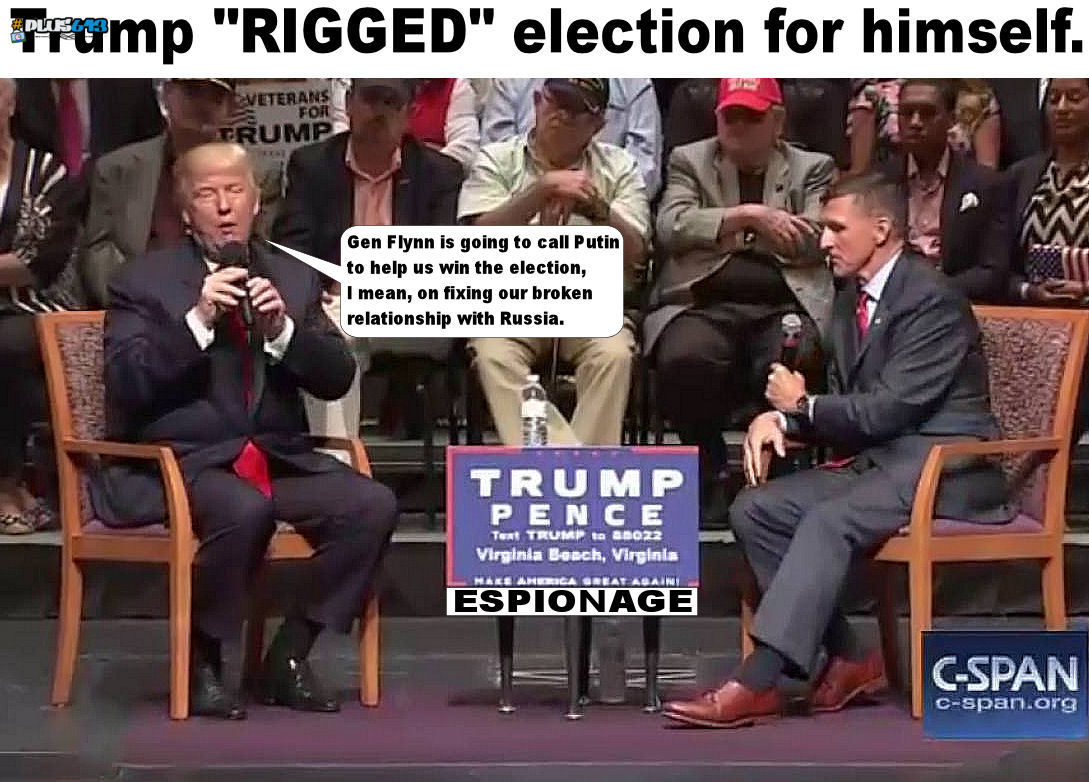 Comments for: The One Thing Trump Didn't Lie About
jgoins Report This Comment
Date: February 14, 2017 12:12PM

The only thing the Russians did was hack the DNC and expose their dirty dealings and deceitful emails, which they never denied. That is not rigging the election, hacking the votes would be rigging the election. Trump was just smarter in where he campaigned for the electoral votes and understood what middle America wanted for the country. Hilary thought she was a shoe in and didn't even try. Give it up, she lost fair and square, stop crying about it and get on with your life.
Robert Report This Comment
Date: February 14, 2017 03:15PM

All the Email release did was tell the truth about the DNC.
The truth is the worst thing that can happen to a Democrat.
Shakes Report This Comment
Date: February 15, 2017 03:33AM

"Always chase the enemy into bad footholds, obstacles at the side, and so on, using the virtues of the place to establish predominant positions from which to fight."

Think about it. A world class, BAD ASS, and arguably the greatest swordsman of all time, concerned with simply tripping up his adversary. And then what? No mercy!! (No Errol Flynn shit here. Hey, Robin Hood is still a favorite!) Why? Because it's a God damned fight, that's why!

One side has been fighting for 60 years up here, The other side is still collectively a moron!

Democatic Party policy has harmed the USA. I would exempt Kennedy, but it still is almost a wash. But, they consistently out class the Republicans in their political play. Dem's(the left) are pressing the Trump administration hard. And the last thing Trump needs is to provide this unforced gift/error. No one should have been talking to the Russians before becoming official. Morons!

The Democrats favorite boy Ted Kennedy dealt with the Russians to interfere with elections, and what happened to him "Nothing"
"Kennedy would lend Andropov a hand in dealing with President Reagan. In return, the Soviet leader would lend the Democratic Party a hand in challenging Reagan in the 1984 presidential election."
aDCBeast Report This Comment
Date: February 15, 2017 09:38PM

The Trump campaign coordinated their attacks on Clinton with the Russian intelligence.

I can't see where the Russians did anything to influence the election except maybe shine a light on the "criminal" nature of Hillary and the DNC. The Russians were not the only nations to attempt hacks against us, it is not an act of war and we don't need an armed conflict with them so let it go.

Where is the evidence beast?

Meh, beastie don't need any proof, he's got 1/2 truths, mistruths, supposition, and out right lies as his evidence ... all being freshly regurgitated by the dems, media and all the establishment repugs, every hour on the hour

When will it ever stop? I don't understand why they want to crash the plane after it already took off. Do they really think they can get Hilary in the office now or are they afraid Trump might actually make America great again?
Robert Report This Comment
Date: February 16, 2017 01:35AM

Them trying to destroy everyone who is not one of them actually make sense.
People who do not agree with them are heretics.
Liberalism is the religion for the criminally insane.

The US intelligence community has the evidence.

There was nothing corrupt at the DNC. You novices just have no clue that the parties only goal is to find the strengths and weaknesses of all of the candidates running for its nomination. The RNC did the same S for all of its candidates. Yes. they did. But you novices don't know anything about political campaigns.

Mr Kim. You can't even wipe your load off your monitor. You should keep your mouth shut.

LOSERS .. You think this is about Hillary? Go Fuck yourself. I would want Obama back.

A party and its presidential nominee just worked with Russian intelligence to corrupt an American election.

Trump and GOP candidates tailoring their daily message to match the Russian intel given to Wikileaks BEFORE it was posted is the proof.

Go back to pulling your pudd losers.

If any intelligence agencies had any proof of any wrong doing we would all know it because they can't keep any secrets.

Odamna can't come back period, find someone else to destroy America for you. Trump is here to stay for the next 4 years and no amount of crying will change that. If all you lefties keep this up you will assure his reelection in 2020 because a very large portion of this country is sick of all your immaturity with your protest and riots. Was there anything like it 8 years ago when your idol won coming from our side?

1st I would like to commend PLUS613 for allowing aDCBeast to post. That is quite magnanimous. "There is nothing corrupt at the DNC." ??? Please provide your definition of 'corrupt' aDC that we might understand more thoroughly. Until you do that I'll just have to remain (almost) bewildered. The way I see it, corruption is the only thing that they have going for them.

All of the (establishment) Democrats and at least 1/2 of the (establishment) Republicans are TERRIFIED that Trump will succeed. That is why the left is throwing the kitchen sink at him and will continue to do so. Because if he does more real Americans will follow him. By "real" Americans I mean the ones that are not bought and paid for. Our(USA) problem is not only the elected officials, but the powers behind them. The mantra "Throw the bums out!" has reverberated in the USA for decades. Well, now we finally have it! Sure, Trump is an egotistical pussy grabbing tool. That's not what we hired him for. It just comes with the package (kind of like a Comcast bundle for you USA cable subscribers).
Russians influencing elections? Momo Giancana influencing elections?? Duh. Every election! I don't think Putin had a preference. But, if he did my guess is that he would prefer a regular stand-up American asshole than another Soros stooge(much more dangerous to him).
I agree with jgoins. If the there was anything, ANYTHING out there regarding Russian collusion they'd be all over it <choose your own metaphor >.

Hang in there POTUS Donald Trump. Drain the swamp.

way to bring out the schizophrenic anon Beastie.
i'd like to meet ONE person that agrees / buys Beastie's B.S., i've got some shit to sell 'em.

@Loner everybody's allowed to speak their mind here, I just wish they'd pick a username and stick to it.
Mrkim Report This Comment
Date: February 17, 2017 02:08AM

Gotta hand it to ol beastie, def a one trick pony, always has been, always will be.

When you need a solid hit of otherworldly delusional leftist motivated babble, ol beaties always at the ready.

The whole fuckin leftist movement is in Fukishima melt down and all because of fuckwits like beastie and his compatriots twisted logic. Certainly can't call it a "train of logic" since trains require rails and that shit's so off the rails, you couldn locate 'em with the fuckin Hubble!

You dems, leftiies, LGBTFs and fragile lil snowflakes just keep swingin for the fences, you're doin all the good so far

Just like I predicted before the election if Trump wins it will be interesting. It is really getting interesting watching the news again. No more news sucking at the wang of Obama.

I would say the vast majority of America is tired of all the bs the left has been doing with political correctness telling us how we should act or which bathroom to use instead of dealing with the economy or illegals or terrorism.

this is a test: