It's a beautiful day 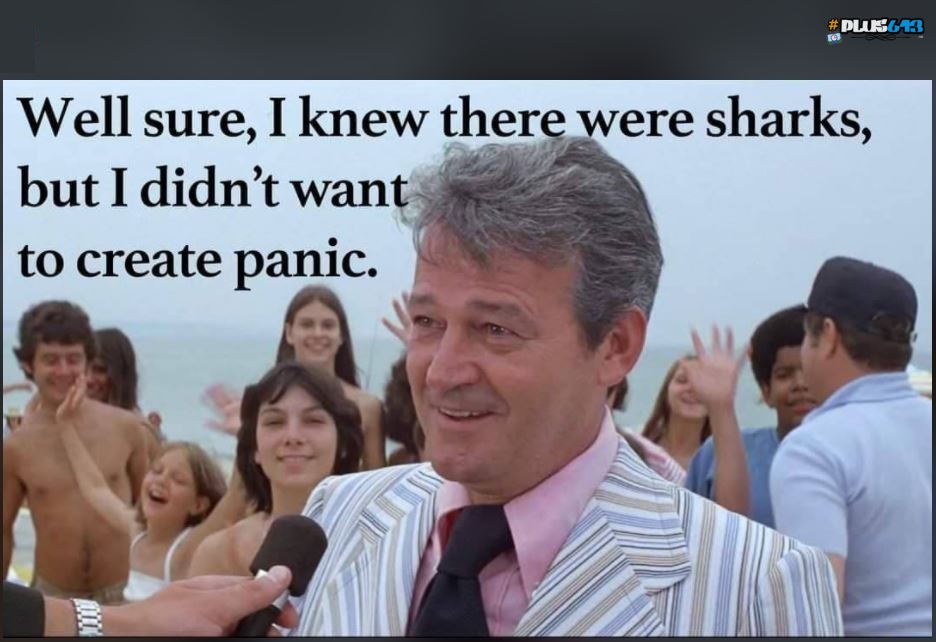 A million people have died of COVID19 globally in the past 6 months.

64 people were attacked by a shark last year. 4 died.

Edit: Incidentally, the global estimated population is 7.8 billion. Deaths of 1 million people is 1 in 7800 people in the world. Factored for 12 months, if the rate keeps up, will mean that approx 1 in 3900 worldwide will die. If you factor in the infection rate is still increasing, it is likely to be even more than that.

Edit 2: Thinking about it further, let's look at the United States. The current estimate of US population is 328 million. Current Covid deaths is 197,472. So that's a mere 1 in 1660 Americans that have died in the past 6 months. Or around 1 in 800 over the course of a year if statistics keep up the way they're going now.

And how many have died in Australia ?
We lose 800 a year to that other corona virus (flu)
We lose 1100 a year to Carr accidents.

What's that got to do with shark attacks?
fossil_digger Report This Comment
Date: September 14, 2020 02:18AM

i like blackened shark steaks with black eyed peas, mashed potatoes with brown gravy, some boiled shrimp on the side......BRB!
quasi Report This Comment
Date: September 15, 2020 10:27AM

Using the number of deaths from another cause to rationalize accepting preventable deaths from a completely different cause is just nonsense.

Blah blah blah orange man bad..
You need the president of the United States of America to explain to you how Not to catch the flu?
It's odd that you routinely criticize Our President but never say Jack shit about Pelosi or any of the other anti-American Democrats..

PJ, I didn't need him to explain it to me but apparently there are a lot of slow people out there who worship the man and hang on his every word who needed him to do the right thing and he failed, a failure that has deepened the divisions between the thinking people and the Trump followers and worse, needlessly cost thousands of lives. Instead of rallying the nation to pull together to defeat this thing the way it has beaten other crisis in the past he lied, he new the danger in early February and even now continues to downplay it and ignore what measures need to be taken. The only TDS that exists is his own and that of the dolts who continue to follow him. And now here's this out today, or is it too sciencey for all y'all. [www.scientificamerican.com]
quasi Report This Comment
Date: September 15, 2020 09:41PM

Breaking news: Trump's business school alma mater, the Wharton School of Business, says Biden's economic plan is more sound than Trump's. Not surprising considering how many businesses (including casinos, lol) Trump has run into the ground and now he's wrecked a country over his failure to admit the truth and actually lead accordingly. And still people think Don the con is a god. I've watched him; he was a fucktard in 1980, a fucktard in 1990, a fucktard in 2000 (I'm paraphrasing arch conservative William F Buckley on that one), a fucktard in 2010, and he's a fucktard in 2020.
jgoins Report This Comment
Date: September 16, 2020 01:46PM

As far as the virus goes, if we take the same precautions we do for the flu we should be fine.

When we give President Trump 4 more years in November we will see a greater nation come out of it. He will be reelected so go ahead and cry about it.