Funny cause its true 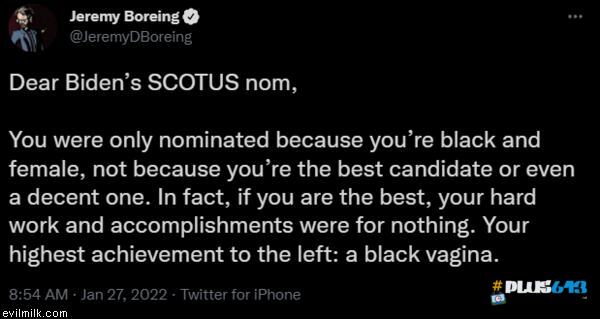 I love how every time I see a Facebook News story about Jackson, the three icons are thumbs-up, heart, and mad face. Every single time.
There's a simple explanation of why there are people who are mad about this. And it runs in the opposite direction of this Boreing post:

No one has offered an explanation for not wanting her in the Supreme Court that is as plausable as this.

Can't define a woman, a racist and a misogynist, your poor little mind is exploding. She is more than qualified in every way, her skin tone and gender just make her extra and you can't handle it. It's only in my lifetime that the first African American and first woman were appointed to the supreme court, one by a democrat president, the other by a republican, both eminently qualified and both with hordes of detractors, so it's well past time for an African American woman who is very highly qualified to be appointed. One day it will not matter what gender or race a nominee is, it should be today but the vitriol in this post obviously says it isn't this day while twisting words in a crude attempt to make it seem it is, but there always has to be a first and the first has to be exceptional as this one is. You and yours will get over your petty butt hurt this time, or at least one hopes you will, and then bring it out again when some other minority is nominated because you have a problem accepting that someone who is different than you is your equal, or worse, your better.
Peter Puller Report This Comment
Date: April 08, 2022 03:58PM

quasi: ...and hopefully when Justice Thomas gets tossed off the bench for his wife's involvement in the insurgency and the perception of having a bias toward the treasonous, he will be replaced by another person of color.
Well-said what you said. Times are (very slowly) a-changin'.
Ffsake Report This Comment
Date: April 08, 2022 10:22PM

Nobody “hates” her, you are missing the point.
The right hate Biden and his predictable leftist virtue signalling.
She is being used and it is sad to see.
Nobody hates her, they feel sorry for her.

Nobody hates her, they feel sorry for her.

People don't think Biden is 'using' her, they think she's a black woman chosen by a Democrat. And those are three strikes right there.
She's a capable judge and among the most qualified candidates available. With her credentials, what's there to feel sorry about?
Only thing anyone using the angry emoji seems to feel sorry about is that Trump didn't get to install a fourth right-wing white male.

Not virtue signaling, actual virtue, unlike the shameless republicans who wouldn't seat a justice months before the end of the Obama administration then had the gall to rush their own through in the waning days of the Trump administration, many of whom voted against seating Justice Jackson over nonsense rationalizations.