But thoughts and prayers 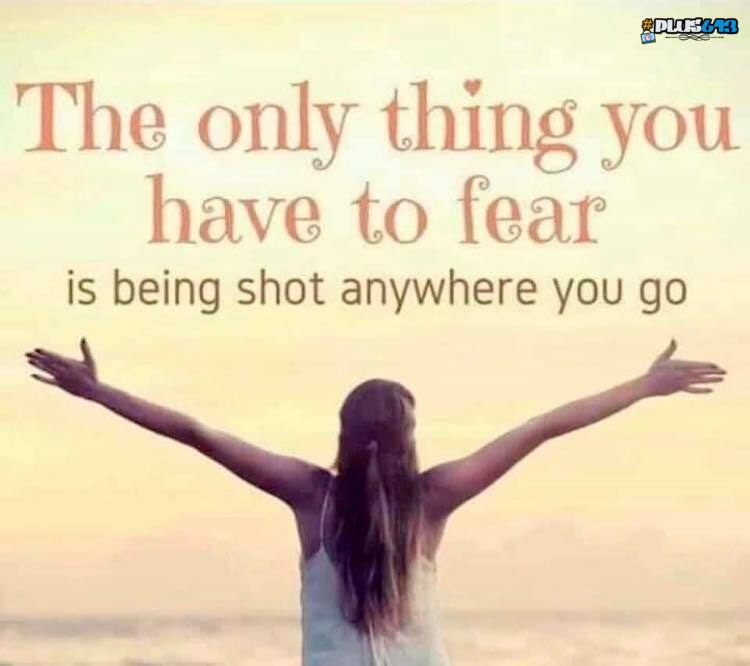 The only thing you have to fear is everything, then. Especially if you're not a male Caucasian. Or you live anywhere near Boebert.
pro_junior Report This Comment
Date: June 12, 2022 01:12AM

In the last two weeks I have travelled 4000 miles through 8 states and in all that time I saw one gun. A man was carrying a pistol in a holster on his hip. The gun did not shoot anyone. Why are you scared of guns?
pulse Report This Comment
Date: June 12, 2022 05:25AM

Aside from on a police officer or airport security, I've never seen a gun.

I'm not scared of guns, been around them my whole life, it's their proliferation, lax regulations, and their power to do harm that have allowed them to be the choice weapon of too many fools and assholes. The number one killer of children in the U.S. now is guns.
quasi Report This Comment
Date: June 13, 2022 12:00AM

I don't recall needing this course when I was in school. Why do my grandchildren now need it, p_j?

I don't recall needing this course when I was in school. Why do my grandchildren now need it, p_j?


Why did we need nuclear attack drills? To be prepared for an attack..

I think the question you might really trying to be asking is why do we have shootings?

Hmm, shit, well, it's obviously the guns fault and nothing to do with the moral decay of out society.

quasi, you own guns. Why aren't you out shooting at people?
Maybe it has something to do with the way your parents raised you and the what you learned in school, or maybe the boy scouts? Church?

When you have an Antifa/BLM riot occur with 2 miles of Your home, then you can talk to me about giving up our guns.

Honestly, if you look at the statistics involving how many schools and school age children there are in this country, sadly these kids are much more in danger of being molested by some purple haired liberal degenerate substitute kindergarten teacher then they are of being shot.

Now go ahead and post a picture of a turd and write "LOL" you absolute moron.

p.s. which is more helpful?

You're no better than anyone else.

I usually find that the best path forward

"Hmm, shit, well, it's obviously the guns fault and nothing to do with the moral decay of out society."

society is decaying everywhere buddy. the entire fucking world is turning to shit. right now, in front of our eyes on a global scale.

the reason there's not shootings everywhere else is a lack of access to guns. i'm very sure if guns were readily accessible that the rest of the world would be as big a shit hole as my state with one of the highest gun death rates around. accessibility is 90% of shootings. the other 10% is desire, for whatever reason. if you don't have a gun you can't fucking shoot someone with it

there are roughly 400 Million guns in America that have never shot anyone.

Massacres happen all over the world. Some via guns, some via knives, swords, hammers, clubs, etc. .. evil is the problem.

Imagine they had access to guns. It's really fucking hard to stab 20 people to death in a public space.

thats just a weekend in america