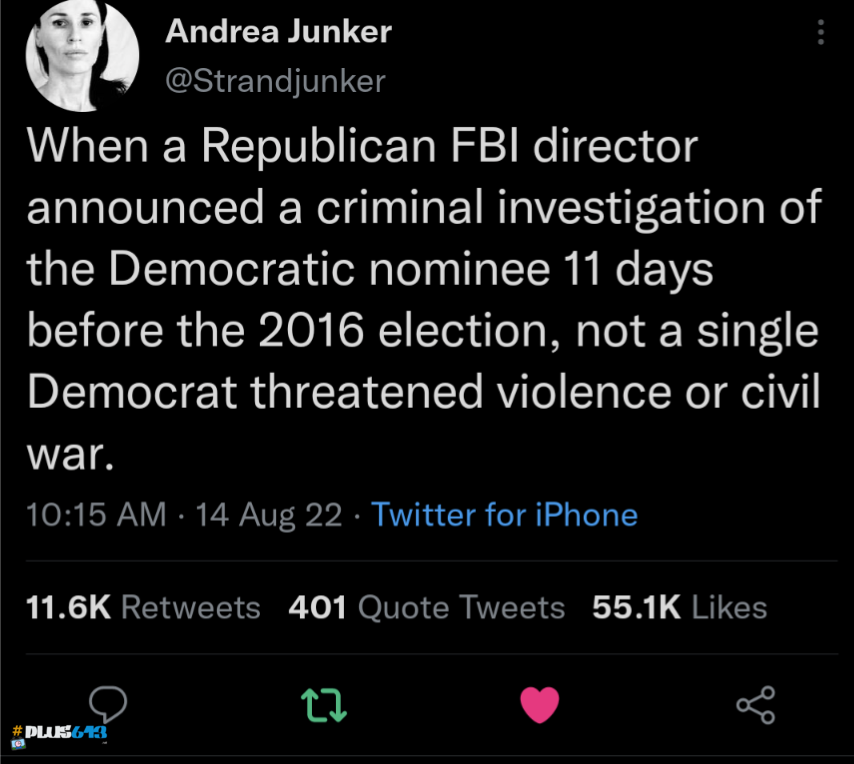 Likely because people with clear consciences react by saying "huh, there's nothing to see; go for it, I'll be right here."

One irony that has escaped some folks: You've got a group of people who are up in arms (possibly literally) over their leader being investigated and raided -- and indeed the witch hunt turned up a coven of sensitive documents that shouldn't have been there -- and their reaction is to say that "when we get into power again" they are going to conduct their own investigations and raids in retaliation. Not even claiming they suspect a specific offense, they clearly state it's in retaliation.

The most hilarious one though was MGT, who wants to abolish the FBI. Be careful what you wish for, lady, they keep tabs on the foreign terrorists as well as the homegrown ones such as your fanbase.

At the end of the day he's being investigated under a law he himself signed in so you'd think you know the rules. I like the responses I've seen so far where instead of his supporters saying "well if he's guilty then fair enough" .. it's "when we're back in power we're going to repeal all these laws". Like.. what the fuck? That's literally what Putin and Xi have done, repealed any law that affects them personally.

Yet apparently the US is against communist ideologies?

As far as taking work home; I work for a large organization. There's a million things in place to ensure that we DON'T send our work home unless it's on a company device (DLP / data leakage prevention). I'm authorized to access the data, but not authorized to take it. If we do, we get fired and potentially depending on the type of breach/data we've sent, we get investigated and potentially charged. It should go without saying that when you leave your job, you return all property. I know they're the rules, so I'm sure a self confessed genius does too.

Sadly it's looking more like the US is going to tear itself apart based on some stupid ideas. Look around the world; the guy next door with a very slightly different belief to you is not your enemy. The people literally plotting to destroy you are. I'm just hoping all I'm seeing is a very vocal minority and that most people aren't batshit insane.

A guy was fired from his temp job, refuses to admit he was fired, and took important work papers home. It's that simple.
They are a vocal minority, a very vocal minority, prone to stating their intentions by what they blame others of doing and now often just saying it out loud. They want a dictator, one strong man in charge because they can't cope with a changing world and see the past through rose colored glasses. The real problem arises because that minority in a country of somewhere around 350 million people amounts to tens of millions and many of those tens of millions see themselves as patriots and they're heavily armed and spread out among us. It's some unnerving stuff living here now and the real irony I see is that the huge distrust of government among these folks was born among the liberals in the 1960's but now it's the liberals who are most in the crosshairs.
Greg teh stop sign Report This Comment
Date: August 17, 2022 06:14AM

The FBI is not enshrined in the US Constitution so it shouldn't be hard to get rid of them
pulse Report This Comment
Date: August 20, 2022 05:57PM

Forget Snoop Doggy Dog, forget old Ice Tea.
The true word out on the streets Is produced by the T.A.C.