Be Scared Be very Scared 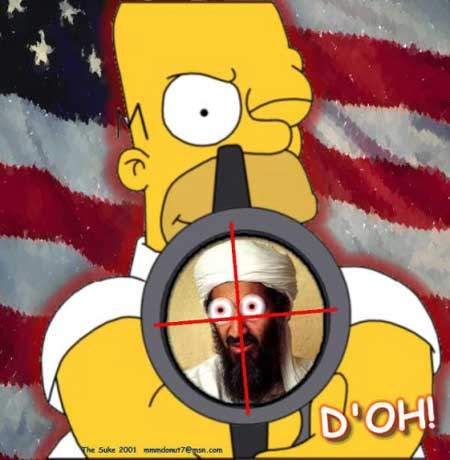 That's just kind of a weird graphic. Somehow Bin Laden has crawled into the barrel of Homer's gun and barricaded himself in with red yarn. Odd.

I'm not sure what this is for. It's not especially funny or inspiring. Bin Laden has been making fools of the American special forces for years now, I don't think he'll be intimidated by a cartoon character.

Although I do agree with Thomas, I do feel his remarks are rather callous, the image is a patriotic, if idiotic statement. Humor is Americas best for of expression through the mide. Look at shows like Soth Park, or The Simpsons. They are our meas to vent frstration as a nation. Although not all american opinions are the same, I feel that this cartoon depicts the mentality of our nation, and the armed forces have nothing to do with it. If you must blame anyone, then blame the leaders of the armed forces.

And to doge, Webster crated this wonderful thing called a Dictionary. Use it.