Idiot of a mayor 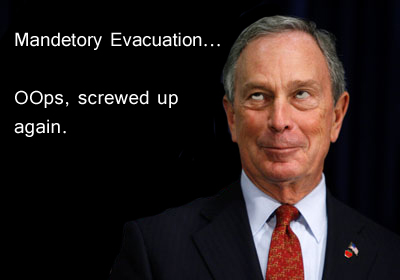 He's known for making every wrong decision...Just do the opposite of what he says, and you'll be fine.
pulse Report This Comment
Date: August 28, 2011 01:50PM

I live in Florida and have evacuated several times for hurricanes but only one time was it actually necessary, and that one time was enough to prove to me that it's better to be safe than sorry because instead of the brush by that was expected here we ended up with a devastating direct hit. I'm obviously a veteran of watching these things and you have no idea how bad things could have been, how bad it looked like it could be, and you are a lucky fool for believing Mayor Bloomberg made a bad call. This could have easily been a much worse storm and as pulse said, what would you be saying had the evacuation not been called and the storm had been as bad as or worse than Katrina? Quit your whining and be glad you got off so easy, idiot.
NYC111 Report This Comment
Date: August 28, 2011 06:02PM

@quasi....exactly, you live in FL. You guys get the beginning of the storms, we get them when they're already weakened, so STFU. He's an asshole of a mayor that screws up everything he touches.
ORLANDO399 Report This Comment
Date: August 28, 2011 07:00PM

Hafta agree with nyc on this one,waaay too much drama for a borderline tropical/hurricane storm
quasi Report This Comment
Date: August 28, 2011 07:20PM

New York and New England have been hit by some very powerful and destructive hurricanes in the past and will be again. It has been my experience that the dire warnings are usually not born out but because it's impossible to have 100% accuracy in predicting the strength and direction of these storms it is better to take heed of them than chance loss of life. Evacuating for a short time is not nearly as inconvenient as death. Hindsight is always 20/20.

i would think the families of the 8 people who died (the count i have seen) would have something candid to say to NYC
ORLANDO399 Report This Comment
Date: August 28, 2011 08:30PM

You guys are comparing an 150mph hurricane to a 60 mph hurricane,you guys might as well compare apples to oranges while you'll are at it!Fossil,more then eight people died in orlando yesterday alone,can't see the point on creating an frenzy that prolly caused more chaos then irene actually did!
BlahX3 Report This Comment
Date: August 28, 2011 10:56PM

I'm with Quasi on his point. I'd rather see evacuation that turns out to be unnecessary after all than people dying unnecessarily. The numbers of fatalities in this vs that, here vs there or then vs now are not something that warrants a pissing match over. Sure, a high death toll is terrible but any number unnecessary and avoidable deaths is a terrible thing. I'd rather see the system err on the side of caution than the alternative. If people are focusing more on fiscal costs or inconveniences of such things then they are clearly in need of a cranial/anal extraction.
quasi Report This Comment
Date: August 29, 2011 01:15AM

The point is that at the time the decision to evacuate had to be made in order to get everyone out in time there was a very real possibility that there could have been 120mph winds or more. By the time you wait and see just how bad it's gonna be it's too late to get out. It was not a bad call given the possiblity that things could have been so much worse. This storm had an unexpected last minute weakening that must have saved a lot of death and destruction. The hurricane we had here took a last minute unexpected turn that devastated this area. There is no certainty about what these things will do until they're all overwith. Again, hindsight is 20/20. Best to be prepared for the worst and be damn glad when the worst doesn't happen instead of bitching 'cause you had to go bye bye for awhile. Be glad if you have a home and family to return to - some people don't.
quasi Report This Comment
Date: August 29, 2011 04:39PM

Better hope Katia makes a hard right turn or you might have to evacuate again. Or just stay put.
quasi Report This Comment
Date: September 02, 2011 10:19PM

I almost wish Katia would come up there and kick your stupid ass, NYC but your neighbors have suffered too much already. Dumbass.