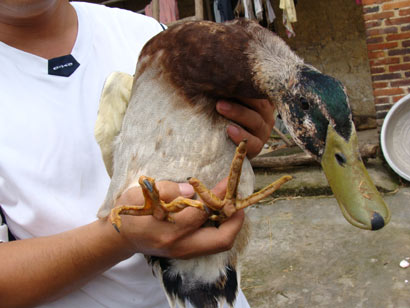 Chicken-footed duck scared of water
A Chinese farmer is baffled after he bought a duck that has feet like a chicken and is scared of water. Curious villagers in Huangjin village, Xicheng town, are flocking to the home of Fu Haiwen to see the duck. Fu said he bought the duck in June but did not notice its unusual feet for ten days, reports Laibin News. It was only after he noticed it acting differently to the rest of the ducks that he examined it closely and was surprised to see it did not have webbed feet. "It never went with the other ducks to swim in the river," he explained. wow, a duck born with chicken feet and is afraid of the water. that is almost like the plus613 users, they were born with a penis but are afraid of vaginas.