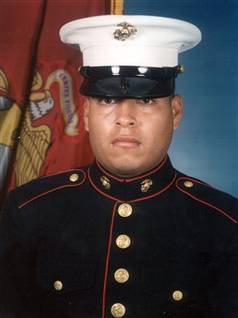 A California congressional delegation asked President Bush on Friday to posthumously award the Medal of Honor to a Marine who was chosen to receive only the second-highest medal the Navy can bestow for valor.

The delegation, spearheaded by Rep. Duncan Hunter, sent a letter asking for a review of the case of Sgt. Rafael Peralta, who witnesses say covered a grenade with his body to save comrades on Nov. 15, 2004, during fighting in Fallujah, Iraq. Already wounded by gunfire, he died immediately.

i'm not going to go fight the oil war or die in a made up so called war so bush and fellow evil leaders can get richer and enjoy life while you die and your family begs the government for a peice of medal to lay on my dead corpse. there are places in this world that needs help to free themselves from civil wars or warlords, to feed millions who are about to die but that don't really matter. bush and the evil leaders got rich and turned their backs on Louisiana. this world is fucked up. vote obama or mccain,no, vote for revolution, freedom, good over evil, rise up and join together and take back this country while you still can because if you don't and you think it matters that you voted for obama or mccain, then you can kiss this country goodbye and your way of life.


Could you and your "ilk" possibly be any more tedious?? Your myopia perfectly compliments your shallowness. Enjoy!!

Ain't this a great country?

It wouldn't matter if a Hitler copy was president there would never be a revolution in this country because you bleeding hearts have been just sitting by and allowing our guns to be removed. Without them there can be no revolution even if you could find enough people to agree on it.
shaDEz Report This Comment
Date: September 21, 2008 08:13PM

Some "way of life"

to dv8)... you want to return to the good old days... then vote for and support either McCain or Obama, either one of them will take you back to those days(albeit the McCain option seems to be going toward Christian fascism, which might suck a just a tad bit more than it does currently). but both candidates are promicing more imperialist war, and expansion. That is how American are so priveledged (in the past), off of the spoils of imperialist conquest. Off of exploiting to nations that US empire has conquered. And no one from the rulling class has any intention of ending this oppression. They give yall a few blood soaked crumbs to fight each other over. So no reforms or any election is going to make things better.

If you seriously want a revolution, you need to get down with the idea that the only way out of this hell is through revolution, and that revolution must be set in the world arena. Internationalist revolution. If we are to be victorious in revolutionary politics the first step is to smash the machinery of imperialism. The oppressed within the belly of the beast have got to understand that their class is an international class. We have no country. And we never did...

That whole "We the people" line, it doesn't include any of us... the original "people" that have any rights (right to dictatorship over the "nonpeople" in the form of bourgeois democracy, and to ensure that the "people" continue to have monopoly over the means of production--to ensure that they are the only property owners) were all white male aristrocrats (bourgeois, actually), property owners. The rest are not entitled to their rights. Now yes, today you do see some blacks in power, some women in power, but that not consolidation of the original contradictions. Concessions were made in order to save face, to appear to be "democratic", to be able to say "we're the greatest country in the world" when there were socialist countries in the world that were led by a communist party--and not revisionist. And also to calm the masses down and to redivide them again. So no, we cannot "take back our country", because we never had one.

Fuck their country, it needs to be knocked ddown and uprooted at the economic base. Their country was founded on slavery, for fuck's sake (and that only ended because it nolonger worked with the evolution of the productive forces, and which also required a war to end)! Their country and their system is completely worthless and rotten to the core! No! let us not take their country, but instead let us take their state power, smash their way (machinery of imperialism) in which they provide for the population. Instead, let's build a new country with a state that is constantly working on ascending the need for itself and the fact that there are different countries.

What nations have we conquered and oppressed in our history?
shaDEz Report This Comment
Date: September 23, 2008 03:27AM

Wounded Knee, 1890:
In 1868, the U.S. signed a treaty with the Lakota (Sioux) recognizing their right to the land around the Black Hills of what is now South Dakota. But when gold was discovered in the area, U.S. troops invaded and war broke out. The Indians of the northern plains were defeated, and two leaders of the Lakota, Crazy Horse and Sitting Bull, were assassinated. Then on December 29, 1890, at a place called Wounded Knee, 500 troops of the U.S. 7th Cavalry massacred over 300 Lakota people who were trying to flee to safety through the winter cold.

The Philippines, 1899:
At the end of the 1800s, the U.S. went across the Pacific to conquer the Philippines. The U.S. first pretended to back Philippine independence from the Spanish colonialists, and then stabbed the people in the back by seizing this island nation as their own colony. When the Filipino people rose up against American rule in 1899, the U.S. poured half its armed forces into the Philippines to drown the rebellion in blood. Massacres continued under U.S. colonial rule. In the First Battle of Bud Dajo in March 1906, U.S. troops, in a counter-insurgency operation, slaughtered all but six of the 800-1000 Moro rebel men, women and children, who held that area in the southern island of Jolo.

Hiroshima and Nagasaki, 1945:
At the very end of World War 2, the U.S. dropped atomic bombs on the Japanese cities of Hiroshima and Nagasaki in August 1945. This was the first –and so far only – use of nuclear weapons in war. More than 200,000 people were instantly murdered, and 130,000 more died in the following years from cancer and other long-term effects.

Vietnam, 1959–1975:
On March 16, 1968, a company of U.S. soldiers went into the Vietnamese village of My Lai with orders to kill everyone and destroy everything. The troops forced all the villagers – mostly women, children, and old men – into a ditch and then shot them. Some women were raped before being killed. Corpses were mutilated. Over 400 were massacred. The name My Lai became a symbol of the massive brutality and horror of the whole U.S. war on Vietnam. By the end of the war the U.S. had dropped more than 7 million tons of bombs – more than twice the total tonnage dropped on Europe and Asia in all of World War 2 – on a country the size of New Mexico.

Afghanistan, 2001- Present:
Present Shortly after the 9/11 attacks, the U.S. invaded Afghanistan in the name of the “war on terror” and “liberating” the people from Islamic fundamentalist Taliban and al-Qaeda. But, in fact, this “war on terror” is a war by the U.S. rulers for unchallenged and unchallengeable global empire. More than six years of U.S./NATO war and occupation have brought new horrors for the people of Afghanistan. The Taliban regime was replaced by a U.S.-controlled Islamic regime made up of feudal warlords and other reactionaries – which means continued poverty and repression for the people, especially women. U.S./NATO ground operations and air strikes have destroyed villages and killed many civilians. These four children were among ten villagers killed in a U.S. bombing raid outside Kabul, October 2001.

Iraq, 2003 - Present:
The U.S. invaded Iraq in March 2003 based on bald-faced lies about Saddam Hussein’s “weapons of mass destruction.” This was America’s next step, after Aghanistan, in the war for greater empire. For the people of Iraq, this has meant home invasions, mass round-ups, and cold-blooded killings by U.S. troops; artillery and air strikes on villages; torture and murder in the prisons. In November 2004, the U.S. laid siege to the whole city of Fallujah, killing several thousand people in the course of 10 horrifying days.

And this is quite abbridged...

"Spin a globe. Take almost any area in Latin America, Africa, Asia, or the Middle East and try to find a place where you could not find a similar—or even worse—record of American brutality, murder, and horror as we have sketched here. From Central Asia to southern Africa; from Central America and the Caribbean to Indonesia; from the Congo to Southeast Asia…and beyond."

from A July 4th Challenge, also from the same issue)

Even if all of that were accurate it is just a minute fraction of all the attrocities committed by European nations in the past. There are reasons each one of these occured and just like beauty it is in the eye of the beholder.

A revolution will never occur here for the simple reason you would need a majority to succeed and you could never get a majority of Americans to agree with and put their lives on the line for a revolution in this country. People would not want to saccrifice what little livelyhood they now have for an abstract idea of a possible future which may not be any better.