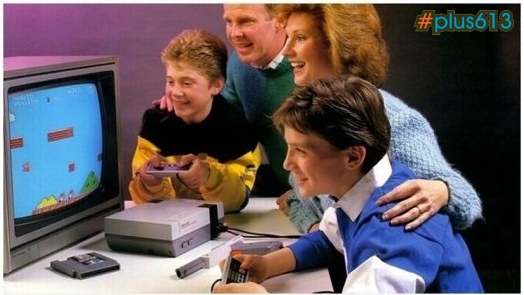 The NES is not connected to anything except the controllers. That counts for 3 things, one power connection, one audio connection and one video connection.
The other four things wrong are the people. None of them are looking at the monitor, besides that they're ugly, the mom forgot to put the `tard helmets on the boys, dressed them like clowns and nobody wears a round necked sweater over a collared shirt unless it's laundry day and there's nothing else to wear or they have a strangle-me-during-clothed-sex fetish.

I almost forgot to mention, that's a Commodore monitor. The a/v RCA connections are in the front under the flip-down cover at the bottom and it has to be open for those connections to be made. There are RCA connections in the back but they are separated composite video (chroma & luma - what has now become s-video, BTW) and not compatible with the NES composite video output.

1. Nintendo is not turned on

2. The cartridge is not even plugged into the Nintendo...

3. Two players at the same time but that game "Mario" is one player only

5. One of those kids is adopted

6. Father secretly wants to be a woman...

7. Woman is not in the kitchen

Some of your answers are technically flawed.

1. The unit cannot be turned on since it isn't connected to a power source.
2. There could be a cartridge in the unit and that is a different one on the table.
3. One of the `tards could just be holding the controller not playing at the moment.
4. This one is correct.
5. You don't know that, he could be the son of the milkman.
6. You don't know that, it is just as likely he actually IS a woman.
7. That could be the kitchen table but she isn't cooking or cleaning so this answer is technically correct.

and those two brats are wearing my stripe shirts!